Jess McGlynnApril 10, 2012
I love Easter – time off work, eating chocolate, giving gifts, Easter Egg hunts…I love the way it feels like we’re saying goodbye to winter and hello to summer.  Which would of course be true if we hadn’t had snow in this week!

This year however, was slightly different.  It was my first experience of ‘The Easter Bonnet’.  Having spoken to various friends with children a similar age to my own, I appear to be something of an anomaly, having made it almost three years before being called upon to produce ‘The Easter Bonnet’.  For those of you who have no idea what I’m talking about an Easter Bonnet was traditionally a hat worn by ladies and girls at Easter.  Somewhere along the line the concept of a ‘parade’ was born, where young children design and make a hat themselves and prizes are handed out for the most creative/elaborate/easter-ish etc

So there you have it – I received my letter with all the other parents letting us know that there would be a parade the following week and that the local paper would be getting involved.  As I have about as much creative insight as a scotch egg you can imagine my horror at the thought that not only would I *ahem, sorry* not only would M have to produce something worthy to be seen by her fellow play mates but also something fit to feature in a newspaper.

I’m not going to pretend I didn’t spend the following three days pacing our lounge floor berating my Other Half over how stupid an idea it was to ask toddlers to make hats (when really I was thinking…my almost three year old could probably do a better job than me and soon everyone will know that!) before taking to the internet to research my options.  Armed with ideas I visited our local bargain store, loaded up my trolley and even managed to engage in conversation with two dear old ladies and pick their brains over what a good Easter Bonnet should look like.

The day before the parade it was my turn to get up with the children, so come 5.30am I was sitting on my lounge floor with Meg surrounded by tissue paper, fluffy chicks, a feather boa and various other ‘creative’ contraptions trying to stop Eli from eating everything in sight and wishing 9am would hurry up and come around so I could wake my Other Half and force him to make the hat instead.  Three cups of tea and an hour and a half later…Eli had retired to bed for his first nap of the day, Meg had yellow tissue paper stuck to her forehead and the hat was still as bare as the day it was born.  I had made, remade and thrown away ten different floral options, text my sister five times to ask her to come round and make the hat instead, tried to entice Meg to do something other than tear tissue paper into tiny pieces only for her to tread on and squish four of the little chicks I’d just arranged on the hat and still inspiration was a distant dream.

The thing is, I had lots of ideas.  And I had lots of ways to make those ideas a reality…but possibly my biggest flaw is my need for perfection.  I am the mama who was once shown a picture her (then) 10 month old daughter had drawn at nursery and who’s response was “she’s hasn’t coloured inside the lines very well has she”…what can I say, I’m on a learning journey!!

Eventually 9am rolled around and I sent Meg to wake up her daddy.  Then I looked around the lounge and realised it looked as though Mister Maker’s van had crashed through our front door and exploded all over the place, and I had nothing to show for it.  So within the space of 15 minutes I stuck, twisted, arranged, cut out and basically made ‘The Easter Bonnet’ a reality.  And I don’t think it looked half bad. 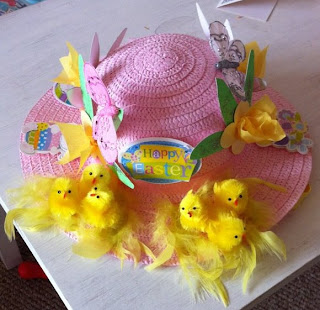 What did I learn from all of this?  Well, my daughter insisted on wearing the hat to nursery this morning.  As she is a child capable of falling over thin air, it lost two of its flowers (luckily I’d made spares!) before we’d even left the house, the butterfly fell off when she collided with another child’s daddy at the gate and best of all, they didn’t even have the parade today!  On top of all that, I saw one child with a monstrosity of a hat, so big he could barely hold his head up when he had it on, with flashing eggs and a giant rabbit sticking out of the top…so I doubt we’d have won anyway!!
Lesson learned: Next year daddy can make the bonnet!