Jess McGlynnApril 11, 2012
Somewhere along the way I got lazy in my parenting…I don’t want to make excuses but I know that since I went back to work I just can’t be bothered to take two tired toddlers out in the afternoons, especially on rainy days, or slightly grey days or even sunny days when we could just sit out in the garden.   It doesn’t help either that E sleeps for two hours in the afternoon.  We arrive home at 1.30pm and by 2.15pm most days he’s in bed until 4.30pm when I wake him up.  So I barely see him.  And since M has always been an independent being she’s quite happy to play by herself so I just become a bit of a nominal overseer.
But that’s going to change.  Over the Easter weekend it was so nice to spend time with M just playing and having fun, not having to worry about the work I had waiting for me at the office or thinking about the mess we were making and how I’d be too exhausted to clear it up and then my Other Half would moan at me when he got home.  We painted, we baked, we danced, we played the “buzzy bee game” which she almost always cheats at (who knew toddlers could cheat!?!) and generally did all the things you’re supposed to do with your children.

On Monday evening before the return to normal my Other Half and I were relaxing with a glass of vino and he pointed out how well M had behaved over the weekend.  In fact, she’d only had one tantrum over the whole four days.  That is pretty much a miracle…on a bad day we can have four tantrums in half a day…four tantrums in an hour if she’s woken up on the evil side of bed.

It really got me thinking and wondering, so I’m going to conduct my own little experiment and in the process really push myself to be creative and enjoy my children.  I don’t want to get to the stage where they’re both at school and think “well, that was a great time spent saying don’t touch that and stop making that mess”.  Although I don’t think I’ll ever be as care-free as some mummies…I’m only human ;o)
(For example, this was the ‘tidying’ that my Other Half and M did last night…I thought my head was about to explode when I saw it) 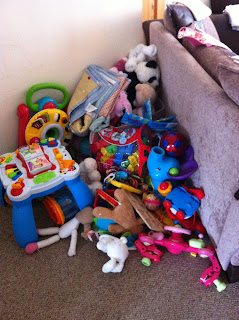 So whilst there might be a limit to the actual mess we make, every day for the next year we are going to attempt to do something different and interesting.  I figure having to write about it (and produce photographic evidence) will force me to do it, we all have tired days and days when we don’t feel like doing things but hopefully with a bit of forward planning, even if I’ve had a crappy morning at work I’ll still be able to get stuck in with the kids.
She says….hopefully J