Your words are your world…

At our Easter Sunday Church Meeting I heard M shout at one of the teenage girls who trying to play with her “I don’t want to; just get out of my face!”  I was standing on the stage at the time and I could just feel my face burning as people looked from M to me.  Talk about cringe-ville.
Not many people in the room would have known that one of my most uttered phrases when I’m irritated or annoyed is “get out of my face” but it doesn’t take a genius to work out where M learnt it from.  In my defence, it is rarely shouted aggressively but a toddler wouldn’t bother to make that distinction.  At least, certainly not mine.

I’ve always been really proud of M’s talking and language skills.  We made the decision based on our own personal dislikes for ‘baby language’ that we would always talk properly to M.  A classic example being that a banana has never been a “na-na”, even when that was all M could manage of the word we still called it a banana when we addressed her.  She said her first word at 4 months and has always been much further ahead in her language development stages.  She currently speaks at the level of a 4-5 year old.

Before you think I’m just using this as an opportunity to wax lyrical about M there is a context to everything.  She didn’t crawl until she was 11 months old.  We had some friends whose little girl is around the same age as M and she was walking before M was even attempting to crawl.  I remember attending a first birthday party when M was 10 months old and watching these babies toddle around whilst mine sat and cried because she couldn’t reach the toy she wanted.

Despite her ability to grasp language and to use it correctly, her understanding of the world around her is still extremely limited and this has led to a lot of frustration and therefore a lot of tantrums.  I joked to a friend the other day that we started the terrible two’s when M was 9 months old but it really wasn’t far off that.

A good example of this limited understanding is often seen when M gets dressed.  She gets that clothes should “match” but her grasp of what that means is that things have to be the same, so in the case of clothes, the same colour.  We must have the same discussion every morning that she doesn’t own a denim coloured t-shirt so she can’t possibly match the jeans that she has chosen.

Another downside of her ability is that we felt justified in talking to her like she was older.  This was a conscious decision but it means that we’ve never altered the way we spoke, to each other or to M.  Don’t get me wrong, we’ve always tried not to argue in front of her and we don’t curse but we talk as adults.  And this seems to have been to the benefit of both our children as E is also at the stage where he has a good level of words for his age. 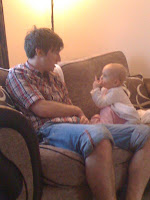 M and Daddy having a serious chat.

Hearing M scream “get out of my face” set a number of alarms bells ringing in my head.  It used to be cute when she spoke like us, it made us feel proud to register the surprise on a strangers face when she responded to the questions they asked us about her but there is something uncomfortable about a toddler using phrases like that.  And how can we tell her it’s wrong because we talk like that.

We regularly get “it’s not fair”, “don’t talk to me like that” and “go to timeout”.  Today alone after the fifth time of telling M she couldn’t have any more of her Easter chocolate she screeched at me “you always say no, I don’t want to be your friend anymore”  *sigh*

When she shouted at the group of older ladies in the garden centre café a few weeks ago “stop talking so loud-e-ly, I’m trying to drink” I got less smiles of happy surprise and more frowns that said “what are you teaching your toddler?”

Somewhere along the line my little linguist became a toddler tyrant.

I guess its swings and roundabouts.  We go through stages of tantrums and shouting usually when M’s language has gone up a notch but her understanding hasn’t quite caught on (in simple terms at least).  We’ve been here before and by next week all should have settled down.

Ultimately the benefits far outweigh the negatives.  It’s fantastic now we are able to hold conversations with her and there’s nothing better than watching her go up to E, give him a cuddle and say “I will love you always because I am your big sister.”  I can cope with my toddler tyrant if every now and then she rolls a sentence like that out.

Nothing beats a cuddle from your big sister.