I recently read a list published by the National Trust called “50 things to do before you are 11 3/4.”

It’s part of a new campaign by the National Trust to get our ‘cotton wool kids’ to spend time outdoors.

I am definitely a parent who sits closer to the cotton wool side than the “it’s all about discovery” side of things. Don’t get me wrong, I want to let my children explore and learn but there’s some part of me that stands with my heart in my mouth the entire time.

Sometimes I can laugh at my own silly nervousness, but then another more serious part of me thinks “yeah and it’s only going to get worse the older they get.”  I believe my kids have got a fantastic journey ahead of them, and I don’t for one second truly believe that something awful is going to happen to them but sometimes, just for a few minutes, I allow myself that moment of panic.

Especially if it involves some hairbrained scheme my Other Half has cooked up…”of course M will be alright to climb that sheer rock face by herself, I’ll stand at the bottom, she’ll be fine…” (before you report us, that is an exaggeration although “she’ll be fine” is a phrase often quoted by my Other Half before he embarks upon something I’m bound to worry over!

Last November we took M to the local fair.   She LOVED it and was asking to go on every single ride we passed.   A total adrenaline junkie, the faster the better.   After saying no to almost every ride we finally settled on one that my Other Half thought was fun enough and I thought was safe enough and honestly I thought I was going to be sick watching it go up and down.   Of course M had no idea and asked to go on it again three more times whilst I was turning greyer by the second. 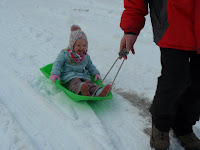 And this year when it snowed and we all went sledging M was absolutely fearless and even ended up going down by herself.

I think it’s a tough line to walk – learning to trust that your kids will be ok and that they need the space to discover and explore whilst at the same time making sure they are safe.

I don’t think I’m doing too badly.  However I may feel inwardly, of the 50 things listed by the National Trust, in her almost three years M has so far done 8.  So I think we’re making good progress.  Although I can’t say that I’m too keen on the “track wild animals” or “set up a snail race” suggestions!!

For more information on the National Trust’s list see here