Weaning: Why you should avoid spicy food…

This is going to be a short post as I really ought to be packing for our visit to the PIL’s this weekend…must. get. on. with. it.

On Tuesday my Other Half made a chicken stir fry which was incredibly spicy.  Both me and M refused to eat it as I really don’t ‘do’ spicy food.  E on the other hand loved it.  He ate his own portion and then cried so loudly when he’d finished that my Other Half gave him the rest of M’s.  My Other Half was ecstatic, raving about how proud he was that E could handle spicy food.

Yeah, great.  Because since that day E has turned into a poop machine.  Every hour he fills his nappy and it’s just HORRID.  Not to mention that it must be giving him tummy ache and he’s been a right grouch.  I’m totally over changing dirty nappies.  My Other Half most definitely owes me!

I reckon every parent has a poop story.  My ultimate favourite is when M was a tiny baby, she couldn’t have been more than a week old as I was still unable to get out of bed much and my Other Half was on nappy changing duty.  We were still in the learning phase of being new parents, my Other Half especially as despite the vast number of books I’d brought into the house, he hadn’t read a single thing about looking after a newborn baby.

On this one occasion, as my Other Half was changing M’s nappy he made that classic new parent mistake of removing the old nappy and began disposing of that without first putting the new nappy on.  Of course M decided that was the perfect time to do an exploding poo.  My Other Half realising what was happening thought it best to ‘catch’ the poo with the first thing that came to mind.  His hand!  Oh how I laughed for weeks afterwards.  Truly it was the worst thing I’d ever seen, there was just poop everywhere…all up the wall, all over the door and all my Other Half. 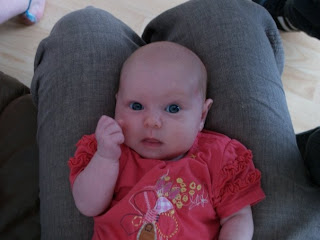 Obviously I don’t have a photo of the said poop incident (lucky for you!) so I’ll just use this cute photo of M as a tiddler.

I suppose, when I think about that event, it puts my own poop changing situation into perspective as I would much rather change a poopy nappy than be covered in it.  Oh it’s brightened my day just thinking about it!!