Conversation in the car on the way home from nursery today –

Hmmm, not being sure that Meg has quite understood the concept of a superhero (although for those of you who know my stories of Meg, she has for quite a while been completing her ‘superhero exercises’), I decided that at almost three she should know a bit more about them so when we got home I thought I’d explain what superheros do.   She looked at me with her usual “yeah alright mummy” face but about 15 minutes later I heard her clattering around so I went to see what she was up to.

“I’m being a superhero” she announced proudly.

“I looked around and noticed she’d fetched her patchwork blanket and had it draped around her shoulders, clearly meant to be a cape.  Great, I thought, she’s really grasped it.

“What’s your special power?” I asked.

She stood and thought for a minute and then ran off and returned with her umbrella.

“Come on Megs” I said, “If you’re a superhero then what’s your special power?”

She gave me a huge grin, opened up her umbrella sat down in it and said “being a tree.” 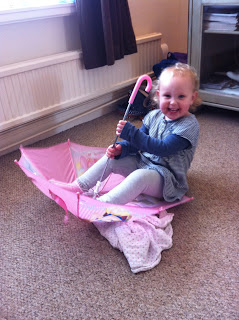 *sigh* I guess I’ve got some more explaining to do!