Blogging it for babies…

I’m a little late into the game but nevertheless this week I am going to #blogitforbabies.
I’ve read a lot of the contributions made by bloggers for this fantastic campaign and thought about joining a significant portion and sharing my birth stories, but the story that sticks out the most to me, and highlights the reality of how lucky we are is Eli’s heart/reflux story.

It will be a long tale, so if you fancy tackling it grab a cuppa and a slice of cake and let’s go on a little journey 🙂

A brief overview of my birth story with E – it was quick!  And I wasn’t sure I was really in labour until I turned up at the hospital and was examined.  The journey to the hospital was 30 mins, we sat in the queue for the car park for 15 mins, walked the 15 mins across the hospital to the birthing centre and I hadn’t had a single contraction.  I was hooked up to the monitors to check on baby and an hour later examined and told I was 7cms dilated.  Two hours after that Eli arrived.

He was a sleepy baby and not quick to latch on like Meg had been but the midwife who delivered him told us he was quite mucusy and babies who are born fairly quickly can suffer from ‘stage fright’ (as she called it!) so we didn’t think anything of it.  Neither did we think anything of the fact that we came home, went to bed around 9pm and he didn’t wake for a feed until 4am.  We actually thought “great, a baby who sleeps!”

Over the next few days though I began to realise that something wasn’t right.  Eli would scream with (I assumed) hunger but then fight to get away from me when I tried to feed him.  He’d get so worked up that by the time I actually got him to latch on he’d be breathless almost immediately, feed for 3 0r 4mins and then fall asleep, and we’d repeat the whole cycle again half an hour later when he woke.

For 3 months I saw the Health Visitor every other week to help monitor his poor feeding.  His weight gain was slow but steady so there weren’t too many concerns other than my hourly feeding routine.  I also took him down to the GP pretty much every week to ask for more help with his rattle and his cough.  Each time I was told it was just a virus.  It makes me so mad even now when as a mummy, having a gut instinct that something isn’t right with your baby sometimes isn’t enough to convince a GP to do something more (but that’s for another day).

Until one such day when Eli was 3 months old I saw Dr Amazing (I love Dr Amazing as he’s the only GP at the surgery with paediatric training and Meg thinks he’s the best i.e. she doesn’t run from the room screaming when he looks at her!).   I explained the situation and then Dr Amazing did a check over of E including listening to his chest.  When I look back now I can appreciate that he spent a long time listening to his chest and I should probably have picked up the signals but I just thought he was checking if Eli had an infection.  Then Dr Amazing got up and left the room.  For 15mins.  When he came back he handed me a sealed envelope and said “I think Eli needs to go to the hospital, just so they can make sure he’s ok.”

Dutifully/blindly/trustingly we dropped Meg off at my parents and took Eli up to the children’s hospital.  We sat in the waiting room for around half an hour before being taken in for consultation.  The nurse who carried out the assessment asked why we were there and I said it was due to Eli having a cough.  Then I handed her the letter from Dr Amazing.  After she’d read it and started back on her notes my Other Half asked her what the letter said.  She paused and then said “it just talks about his cough and poor feeding.”  Then she left the room.

When she came back we were taken to a small changing area where I could attempt to feed in private before being moved to our “pod” (nice name for hospital room!).  We arrived at the hospital around 5pm and were in our pod by 7.30pm.  I was given some dinner as a feeding mother and my Other Half went to the cafe to get something to eat.  And then we waited. 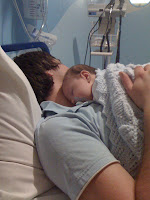 Daddy and Eli having a sleep.
Then a young doctor came in and asked us again, why we thought we were at the hospital.  At this point, we did raise our eyebrows at each other (didn’t they have any notes!?!) but explained that it was due to Eli’s cough.  The doctor checked Eli over and asked a bunch of questions about his feeding…
“Does he struggle?”  “Yes”
“Does he get exhausted?”  “Yes”
“Have you ever noticed him getting blue around the mouth” “Yes”
She listened to his chest again and left.

We waited some more and then two young nurses came in to check Eli’s vitals.  By this point we’d had enough.  Eli was howling, we weren’t really being told anything, and were beginning to get suspicious about why we kept being asked what was wrong with Eli.

At 11pm my Other Half went to ask if we could discharge ourselves as we were, quite frankly, fed up and exhausted.  The nurse at the desk advised us that we could of course discharge Eli anytime but she strongly recommended waiting.

Not even 2 mins after that exchange the young doctor came back in and said she would like us to stay and wait and that she wanted her Registrar to come and see Eli and speak to us.

All this for a flipping cough?  I’d wanted to be taken seriously but I think we were both a bit surprised at this!

It was around 1am when the Registrar came in to see us with the young doctor.  The first thing he asked us after checking Eli over and listening to his chest was why we thought we were there.

I did, at that point think my head was going to explode, and just glared at him whilst he went on to explain that Dr Amazing had picked up a heart murmur and had felt it was significant enough to send Eli for further examination.  He went on to explain that his colleague (young doctor) also considered it to be serious and that having checked Eli over he too considered it to be high level.  Talk about a curve ball.

I remember being dumbfounded and just saying “but what about his cough?”

They felt that was the reason for his poor feeding and his breathlessness and discharged us for the night with an appointment two days later for further tests to be carried out.  We sat in the pod for a good half hour after they’d left just stunned.  Looking at our beautiful baby boy and wondering how there could be anything wrong with such a tiny human being.  In the end we did the only thing we could think of, we prayed.  Prayed that it would be a mistake, that when we came back they wouldn’t be able to find anything and there would be another reason, an easy, fixable reason for Eli’s poor feeding.

And do you know what?  For our little miracle baby that is exactly what happened.  The Consultant who saw Eli said he could only hear the tiniest murmur, the smallest whisper of a noise and after much extra insistence from me that as a paediatrician he should be able to tell me why my baby had a cough diagnosed Eli with silent reflux.

I’m not making light of babies with heart issues, and I thank God that our story was a simple happy one.  We know people who have walked through the more serious side of that and it’s tough and heartbreaking.

For weeks and months afterwards I was so angry that a) none of the GP’s I had seen had ever even suggested reflux as a possible cause of Eli’s problems and b) that we had spent about 9 hours at the children’s hospital without ever being told why we were there.  It still makes me seethe a little bit now and I do wonder if we went through the same thing again whether we’d be much more forward in finding out what was going on.

But here’s the crux of the issue…quite simply, I was able to take Eli down to the GP’s surgery as many times as I pleased.  We were able to take him to be seen by specialists and yes, we had to wait, and ok, it wasn’t the best experience we’ve ever had but so what?

It seems completely trivial when put into perspective:

Blog it for Babies is part of Save the Children’s Build it for Babies campaign to raise money to build 7 new clinics in Bangladesh.

It’s an amazing campaign and I’m proud to be able to write about it.