Where did the last three years go?!?

Jess McGlynnMay 8, 2012
Last week was crazily busy and went ridiculously fast as we prepared for the kids birthday party on Saturday and then Eli’s birthday on Sunday.  I won’t have much time to blog this week either as it’s Meg’s birthday on Friday but I didn’t like to think of not blogging for the whole week.
Firstly, I can’t believe that Eli is one, but more than that I can’t believe at all that Meg is three this week.
In the spirit of nostalgia I thought I’d share some of my photos and thoughts from the last three years.
I may have been a rarity for a first time mother in that in my attempt to pretend it wouldn’t happen to me, I refused to read any books about labour and only attended a one-off 3 hour antenatal class with my Other Half provided by the NHS, where we were talked through the various pain relief options and then shown a video of an ‘average’ sized baby followed by a ‘larger than average’ baby being delivered (and I’m not going to lie…I didn’t watch either).  So I really was unprepared for what actual labour would be like.  I’d also, somewhere along the line, adopted the idea that I was going to do the whole thing ‘au naturale’ and wrote in my birth plan that I didn’t want an epidural regardless of what I asked for!
Of course, it didn’t happen that way at all.  I woke up at 4am with contractions every three minutes apart.  As we didn’t have a car at the time we had to wait for a friend to come and pick us up and I was in total panic mode.  By the time we made it to the hospital 30 minutes away I really wasn’t coping.  I cried through my examination (even though I was 6cms dilated) and within half an hour was begging for an epidural.   9 hours later I was ready to push when the midwife realised Meg was a compound presentation and had her elbow crossed over her face.  By that point it was too late and I was already pushing…all I can say is I am mightily glad I took the epidural!! 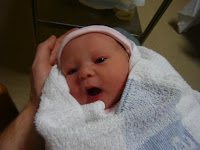 Meg, a few minutes old
From day one she’s been a character.  Totally alert and taking in her surroundings we thought it was amazing until we realised that she didn’t know how to switch off and would just stay awake until she was totally exhausted and screaming.  At 3 months the Baby Whisperer became our guidebook and we never looked back! (Interestingly, we didn’t even consider using it with Eli)

I have often observed to friends that I’m glad we had a baby like Meg first as it meant that any baby that followed would seem easy.  And I truly mean that.  On Eli’s bad days he doesn’t even scrape the surface of how bad Meg could be.
My Other Half once filmed one of her screaming tantrums and I wish we’d kept it, it would act as a very good contraceptive!  I can even remember one time when she was 9 months old and she was crying so hard that I thought something must be wrong with her, so I packed her into the car and drove to the local walk in centre.  Turns out she just wanted her own way.
We’ve been dealing with the terrible two’s since Meg was first mobile at 10 months.  For whatever reason, she always wants to be one step ahead of where she’s actually capable of being and this has led to a great many frustrations.   It’s also taught me a lot about patience!
But over the past three years, we’ve watched an amazing little girl learn and develop every single day to become the Meg that we love (and honestly, sometimes despair of!)
She is demanding, strong willed and stubborn.  But she’s also funny, passionate and cute beyond belief (I’m allowed to say that, I made her)
She’s also fantastic with Eli, and I’m so pleased to say that she’s only ever been guilty of over mothering him.  Peppa Pig has a lot to answer for in this house! 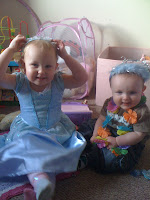 When Meg decided to dress up a cinderella and make Eli her fairy godmother.
I’m aware this is at risk of becoming a self-indulgent post about how fantastic Meg is so I’ll just wrap it up with this: I am so proud to be mummy to Meg and I can’t wait to see what her next three years bring.  There will be many more milestones to come but as long as she stays her little cute (sometimes stroppy) comical self, I think we’ll do just fine! 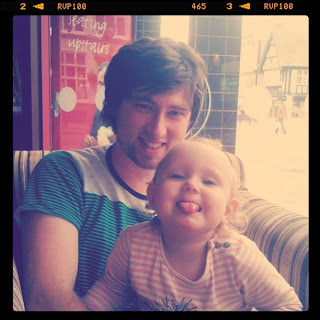 I’ll leave off telling you all about Eli until another day ;o)