Just over a week and a half ago I tweeted “today is the day when 3 become 5″…apparently I’d forgotten how many people are in my family!  D’oh!  I’m not sure which one I’d forgotten, my Other Half probably ;o)

That was the day we picked up our new additions, the rabbits!

Meg, bless her, on being asked what she wanted to call them chose the names “rabbit 1” and “rabbit 2” but after a bit more thought she chose the names Peppa and George (original I know!) 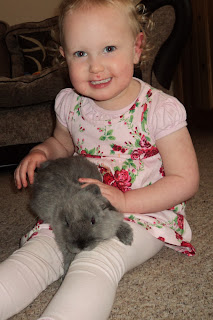 Peppa is blue and George is white with magpie markings.  It seems my decrepit hamster detector didn’t let me down as George is a bit of a wimp and Peppa gets first pick of all the food, meaning she is now twice the size of him.  She sleeps next to the food bowl for ease of access too!

We’ve had lots of different comments ranging from “waste of time and money” to “great idea for the kids” but so far we’ve seen nothing but positives, they are both very friendly and don’t seem put off by the loud noises of two small children.

Meg is very good if somewhat determined to mother them and doesn’t yet grasp the concept that they might want to run around and not just be carried around by her (I’m seeing visions of her pushing them around in her pram in the not too distant future!) and Eli gets very excited when they are hopping around and will start shouting and chasing them, making a grab for an ear or a tail if he gets the chance!  Despite this they seem totally happy and content. 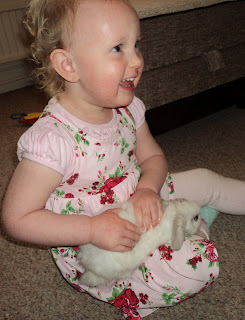 It’s been a brilliant tool for teaching Meg.  She doesn’t yet fully understand how to care for them but we’re putting the foundations in.  She will help change their straw and give them hay and when we went down to the market we were able to talk about different vegetables they can eat and she chose which ones she wanted to buy and bring home.  Eli’s getting the knowledge second hand too as I can often hear Meg repeating all the things we’ve said to her later on! 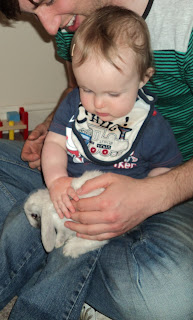 I‘m under no illusion that it will probably end up being me or my Other Half who look after the rabbits the most but I think on the whole it’s important to teach children about the responsibility of taking care of animals.   And it gets us off the hook for having to get a dog for the moment too!