I’ve always been interested in the debate over nature v nurture.  People often comment on similarities between myself and my mum and whilst initially in my teenage ‘I’m my own person’ years it used to bother me, I’ve come to see it for myself.  I do often comment now that when people meet my mum they begin to understand why I am the way I am!

I’m even more intrigued now I have my own children and I’ve begun to see their personalities developing…how much of it was already written into their genetic make up and how much is learned behaviour?
I was reminded of this in a couple of ways this week.
Firstly, at nursery Meg walked into the corner of a radiator and came home sporting this: 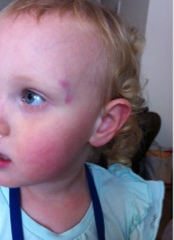 I was furious with nursery for not having a cover on the radiator if it’s at toddler head height.  And then more annoyed with Meg when a few hours later she managed to fall down the stairs at home because she wasn’t watching where she was going again.  We often joke in our house that Meg is the girl who could fall over fresh air but she really is.
And I suspect she gets it from me *sheepish look*
Only last week I got my toe caught in my pyjamas and went flying headfirst onto the floor.  Three weeks ago I somehow got entangled with a wash basket at the top of the stairs and walked away from that experience covered in six or seven large bruises!  In fact, just now as I’m typing I’ve just looked down and noticed two new bruises on my legs…I don’t even know how they got there!
I would never have thought clumsiness would be a genetic trait but apparently Meg is a mini replica of me…perhaps it’s a lack of spacial awareness, or maybe we’re just so preoccupied with our thoughts that we don’t pay enough attention to what’s going on around us!
And then there are our similarities from a ‘personality’ point of view.  We moved Meg and Eli into the same room last week as the room we had as our nursery is our box room and is just not a very nice space.  We trialled it for a week and then, on deciding it was a success, we moved the rest of E’s stuff into there.  Rather than having two wardrobes it made sense for them to share.  Well, you would have thought something horrendous was happening the way Meg carried on.  She got incredibly distressed at the thought that I might be taking her clothes out of the wardrobe and putting Eli’s in there instead.
By the end of the day I was getting fed up of her constantly checking what we were doing in her room and repeating “but my bed and my clothes will be staying here won’t they?”  I was bemoaning this fact to my Other Half and he just laughed and pointed out that I would be doing exactly the same thing.  And he’s completely right.
We recently changed our bed and I got in such a tizz about how it would look and where all our old stuff would go…I think I must have ‘popped’ my head in to our bedroom four or five times whilst my Other Half was building it and moving stuff around, just in case he needed my opinion or advice!
In many ways, Meg is just a mini version of me.  I could list so many more examples but there just isn’t time!  It’s interesting to wonder whether she’s like that because she imitates the way I am or whether she would always have been this way because that’s how she’s wired.  Obviously it’s a lot more indepth and intricate than all that but it’s interesting to think isn’t it?
I guess the real tell will be time – ask me in ten years whether I think nature or nuture is to blame at work!