This is my blog’s first ‘guest post’ but when I heard about the petition to stop the closure of Glenfield’s Childrens Cardiac Heart Unit I knew I wanted to do something!

Laura is a lovely friend of mine who has close ties with Glenfield.  Please take the time to read her post and sign the petition at the end.

I wasn’t sure where to start with this blog post, being honest I’ve never written for any kind of blog but when Jess asked me to guest blog about Glenfield I couldn’t say no.

I am very emotionally attached to Glenfield – my daughter, Isabelle, came into the world in May 2009 and thanks to the amazing team at Glenfield she is still here. 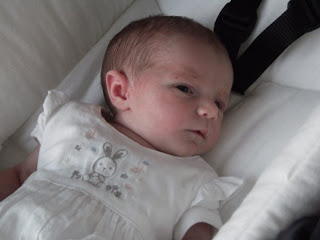 As a first time parent I was incredibly naïve thinking that as soon as Isabelle was in our arms she would be safe and well, after all, you don’t get told about things that can go wrong with a full term baby.

Our first sign that something was wrong was Isabelle’s feeding.  She just couldn’t be bothered to latch and would be exhausted pretty quickly.  She would scream for hours on end, not a normal ‘I’m upset’ newborn cry but a shriek like she was in pain.  So when her 8 week check rolled round I was almost expecting them to tell me something wasn’t right.  But I was still shocked when I was told it was her heart. I must add at this point it is very common for babies to be born with holes in their heart although most close up within the first year of life.

So that was how our lives began to revolve around Glenfield.  I can’t fault the care we were given, within hours of them seeing the footage of Isabelle’s heart scan they phoned us telling us to come in the next morning, yes incredibly worrying, but we had waited until she was 5 months old for that initial scan at Derby Hospital so I was thankful for Glenfield and their efficiency.

We were told that Izzy had a doubly committed VSD (a hole below the 2 main arteries in the heart) and at some point she would need surgery to fit a bovine patch, because of where the hole was it was unlikely to heal itself, but they gave us time to see if it would.  Izzy battled on for 5 months but as she carried on developing, trying to crawl, trying to cruise etc she was always worn out.  Her weight gain was non existent and I was at the Health Visitors every week crying because she’d lost more weight or jumping for joy because she’d gained an ounce.  My husband and I grew fed up of seeing her fade and having to fight so hard.

When our next appointment at Glenfield came through we went ready to tell them it was time, Izzy was losing the battle.  Our consultant agreed as her scans showed no improvement and her heart was struggling.  We were given a date for surgery for when she was 13 months old.

We will never get the image of Izzy being put to sleep out of our minds, it is by far the hardest thing we have ever been through.  Izzy was in fantastic hands though, her anaesthetist was one of the friendliest women I have ever met, she reassured us, gave me a box of tissues and a hug telling me she would look after Izzy like she was her own.  I believed her completely, she truly cared.

Six hours of waiting and Izzy was finally settled in PICU, the surgery had been more complicated than they thought, her main arteries were too close together so they had to separate them and they also had to close a PDA (a valve that normally closes after birth), on top of that her hole was larger than anticipated – the surgeon was amazed by my little lady’s strength as her heart had started to fail. 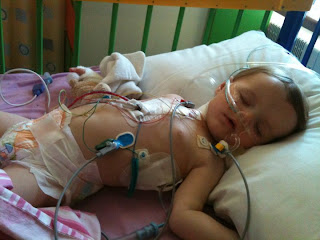 Throughout it all Glenfield were fantastic, they guided us as parents, they actually cared about Isabelle and our family, we weren’t just another number to them and they saved my daughter.  I can never repay them for this, every nurse, every doctor, every consultant they all played a massive role in my daughter being here with us today.

Izzy spent 7 days in hospital due to complications in her recovery (she had air trapped in her lung space so her lung couldn’t fully inflate), had she not had the complication she would have been out on day 4! 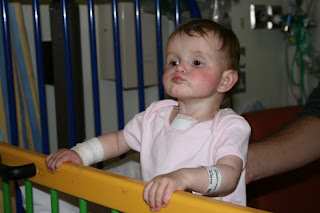 As a parent it’s an experience you try to forget, we didn’t take any pictures of her in PICU, we found it difficult seeing her like that.  I will always cherish one memory though, Izzy had her final drain out and we were told we’d be going home the next day.  As we could finally take her off the ward we went to our parent room.  We sat Izzy down and she stood straight up and walked!  It was like she’d known how to all along but had never had the energy!

We are one of the ‘lucky’ ones and we will hopefully never have to go through that experience again.  One operation and I’m pleased to say Izzy is a very happy energetic 3 year old! 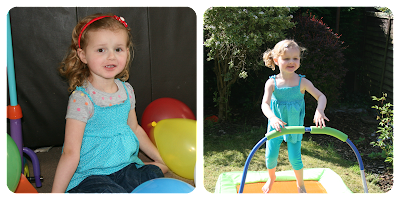 This isn’t the case for a lot of heart patients though, they need Glenfield!

So now you can see why I am so desperate for Glenfield to stay operating as a Surgical Centre.  You might be thinking “this won’t affect me” well, you’re probably right in a way but never say never.  I never thought my first child would be seriously ill but that was the hand we were dealt.

The new “Safe and Sustainable Review” has decided to close 4 centres to bring Heart Services together in order to create ‘Centres of Excellence’, reducing the number of Cardiac Surgical Centres from 11 down to 7.  The proposed centres to remain open are:

Unfortunately we had to make a few ‘quick shove things in the car’ dashes to Glenfield when Izzy’s health started deteriorating and we were lucky she wasn’t in heart failure – if had she been in heart failure with having to get to Birmingham I doubt we would ever have made it.  I am very thankful this won’t be a reality for us.

Parents will still have all their outpatients appointments at the local centres so it is just surgery that will be at the main centres, this to me shows the threat of communication errors.

I’d like to just briefly go into the benefits of Glenfield – many MP’s, consultants and experts from all over the country, not just the Glenfield district are fighting for Glenfield to stay open for the major benefit of the centre which is its ECMO unit (extracorporeal membrane oxygenation).  Glenfield’s ECMO unit has been established for 20 years.  It is now the largest of 4 in the UK.  It was also the first one in the UK. 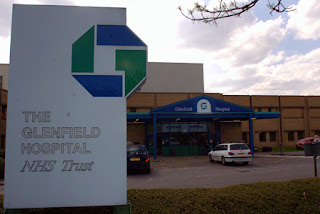 Many ECMO experts have expressed their concerns over moving this service to Birmingham.  It takes a long time for these skills to become established and moving this unit will see the loss of 20 years of expertise and they are taking the risk of it also causing the loss of some lives along the way.

Glenfield’s unit has a 50-75% better success rate than any other unit in the UK.  I can’t stress how important it is that it stays at Glenfield, would the experienced staff move all their families over to Birmingham?   I very much doubt it.

From a parents point of view Glenfield is fantastic, there is everything you need so you never have to leave your sick child, rooms right off the ward for you to rest your head or have a cry in private, a fully equipped kitchen and a bathroom.

If you got this far in I applaud you I’ve rambled a fair amount there, I by no means claim to be an expert on all things Glenfield I have done as much research possible when I have two children to run around after!

I would just like to urge you to sign the epetition that has been set up so we can get this discussed in parliament in September, we need 100,000 signatures so please spread the word!