Colour Me In RK

Meg was very excited when a package arrived last week containing not only a fantastic box of colouring equipment but also her very own box of Rice Krispies (we haven’t been allowed to share with her!) 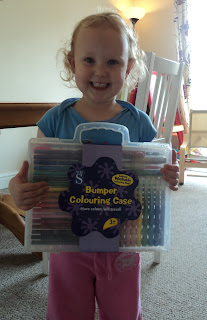 After taking every single item out of the colouring case, checking them all over and then standing over Mummy as she put them all back again(!) Meg got stuck in straight away with colouring in her box.  It was a work of art which was completed over several days…this more or less transpired to mean several layers of colouring over the same places but I don’t think she’s done a bad job at all. 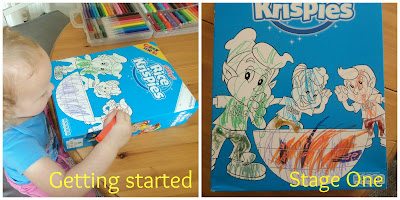 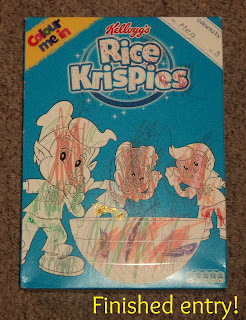 Meg’s favourites were the colour changing stamps.  She decided to use the lips to decorate her bowl.  She also decided Snap, Crackle and Pop should all have glittery trousers and that the ‘Rice Krispies’ should be red polka dot.

As the weather continued to be miserable I decided to check out the Rice Krispies website for some more rainy day activities.

First we came across some recipes and after much deliberation, Meg chose to make the Chocolate Snap Bars.  They were so easy to make but we made A LOT of mess.  Eli was in his element trying to catch the falling rice krispies!

As Meg was Head Baker, the finished product has the added ingredient of pink sparkles, just to give it that extra girly touch.

The following day we set about colouring in some finger puppets I printed from the website.  Whilst the life expectancy of these puppets in the hands of a 3 year old wasn’t too long we had lots of fun playing with them.

Colour Me in RK is perfect for this lovely british weather we’re having!  For more arts and crafts ideas check out the Rice Krispies website.

This is our entry for the Britmums #ColourMeInRK competition, sponsored by Kellogg’s.

I was sent the colouring pack and box of Rice Krispies for the purpose of this blog post.