Jess McGlynnAugust 3, 2012
We were really quite lazy when it came to Eli’s weaning.  Because of his silent reflux we weaned early with baby rice and porridge (which made a huge difference) and when he reached 6 months and we started on the ‘real stuff’ we had to be careful about what foods we gave him and I kept a scribbled carefully written out diary of when he’d had things and how he’d got on with them.  So I suppose in that respect, we were totally on top of things.
With Meg we did a mixture of purees and BLW (baby led weaning) and soon found that despite the hours I stayed up steaming and boiling and mashing a fantastic array of pureed fruit and veg, she only really wanted to feed herself.  For a while we managed with a ‘mummy has a spoon and Meg has a spoon’ swapping routine but we gave that up after a couple of months and just let her go for it.
With Eli, not only did I not have time to stay up until the early hours make purees but I was also fairly certain that it wouldn’t interest him anyway.  Not when his big sister was having something different.  And I was right to a certain degree.  He ate what we ate but in a mashed up version.  Off a spoon.  Given by us.  Truly, I don’t think a lazier baby ever existed.  It honestly seemed an effort for him to sit up in his highchair and open his mouth some days!  If given the food himself it was thrown on the floor and he would hand us his spoon or point at our dinner and our cutlery.
So, we soon fell into the habit of spoon feeding him, and as it meant less mess to clean up after meal time we’ve just stuck with that routine.
Recently though I’ve been watching other children of a similar age and thinking, really Eli should be able to feed himself by now.  I’m not expecting him to be a wonder kid with a knife and fork – I’d be happy if he just ate with his fingers.
So last night we decided to let him go for it.  I bought some lovely new placemats from Ikea at the weekend and had it all planned out that he would eat nicely off the mat…(honestly, you’d think I’d never experienced mealtime with a toddler before!).
Suffice to say the mat was the first thing to go on the floor.  The rest of the dinner did successfully make it to Eli’s face and a certain proportion into his mouth so I’ll give him top marks for his effort!

It’s lucky for him he makes messy look cute! 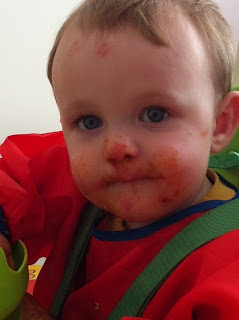 I don’t think there’s a way back now either, when I tried to give him a yoghurt afterwards he just kept grabbing the spoon out of my hand and attempting to do it himself.
I guess we’ll just be doing messy mealtimes for a while yet.  Let’s just hope I’m not the only one who has a baby that likes to share their food with their face!