Last week I wrote about Eli’s climbing antics for Middle Man’s Mischevious Monday and whilst pondering over which of his little misdemeanours to include this week Meg came into the room, put her hand in her pocket and pulled out a toy which didn’t belong to us.  I asked her where she got it from and she just shrugged and said “I put it in my pocket”….yes, Mummy could see that!

Meg has always had hoarding tendencies.  We’ve called her our little magpie since she was a baby as anything sparkly and shiny grabs her attention and the second she gets her hands on it, it becomes hers!

It’s an acknowledged fact that my Other Half’s t-shirt drawer is her favourite hiding place.  Currently residing in there are her tinkerbell keys, my ring and a glittery sticker from her Easter bonnet.  There’s no point taking the things out as she’ll replace them soon enough with new trinkets. 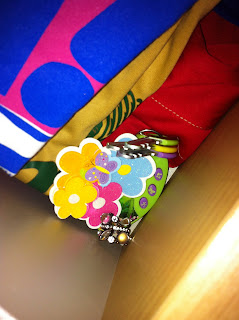 Possibly the biggest steal she’s ever made were my wedding and engagement rings.  She took off with them one day and it was over eight(!!) months before we found them again, and then only by happenchance as we were replacing our media unit and as we took it apart my rings appeared!

So I thought I’d share with you Meg’s pocket collection from last week.  These were all things that I discovered prior to putting her trousers into the washing machine, some of them are ours and some of them aren’t! 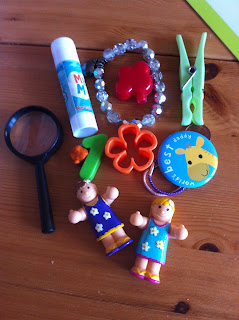 It remains a mystery to me how she managed to fit some of them in her pocket in the first place!

I’m linking this post up with Louise at A Strong Coffee’s Mischevious Mondays.