Last week we arranged a playdate with some friends who live just around the corner from us, a 5-10 minute walk.  Unfortunately it coincided with Eli discovering his independent streak and refusing to sit in the pushchair (luckily this is over now *phew*) so rather than fight with him I thought “it’s only a short walk, he’ll be fine.”

I’m not sure whether I could have been any more wrong!  It took us an absolute age to walk there with Eli having to inspect every single tyre on every single car we walked past.  Poor Meg kept running on ahead and then coming back and saying “Oh not again Eli!” 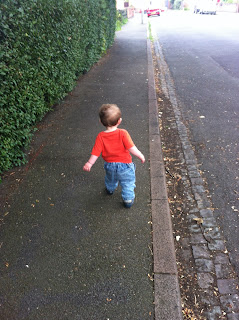 The walk home was even worse.  My Other Half came to meet us and went on ahead with Meg and I trailed behind with Eli.  Every wheel, every leaf, every gate we had to stop and inspect.  At one point he chased a cat under a van and then lay down trying to reach under to get to it shouting “eeoow eeoow” as the poor thing cowered in fright!

Mixed into this was the fact that he was clearly tired so would take a sitting down break every few steps and refuse to budge.  If I tried to pick him up he’d shriek and wriggle to be put down again. 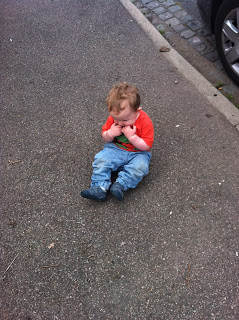 Suffice to say it took us about 45mins to get home!

I’m linking this up with A Strong’s Coffee’s Middle Man’s Mischevious Monday’s.

Thank you to Louise for choosing my story of Magpie Meg as the Mischevious Monday story of the week.  I’m sure you’ll all be pleased to know the tinkering has continued with Meg somehow managing to steal four giant pebbles from the beach on Saturday and bring them home with her!! 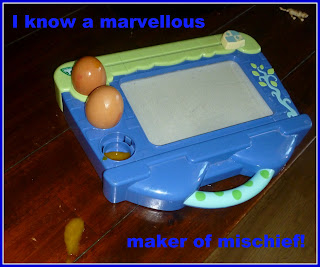