Some of you may know that we made the *ahem* wise decision to go camping for three nights in the second week of September.  The main purpose of this adventure was to take Meg to Peppa Pig World as a special treat.

In order to get there, she had one important task…to behave herself!!  She managed this beautifully somewhat in the week leading up to our holiday and so earned her treat and on the second day of our holiday, off we went!

I’d done a bit of research and measuring beforehand and knew that entry for Meg was free along with Eli.  I didn’t realise that she was actually the perfect height – at 98cms she was tall enough to go on all but three of the rides at the whole of Paultons Park but we hadn’t had to pay for her entry which was a huge bonus.

I’m of the general opinion that one theme park is pretty much the same as any other theme park so I was pleasantly surprised by Paultons.  The first thing we did when we arrived (other than losing £1 in a dodgy locker, but I half suspect this was my OH’s fault for not reading the instructions) was get a lost child sticker for Meg.  These were situated right by the entrance, I wrote my phone number on and stuck it on her back. 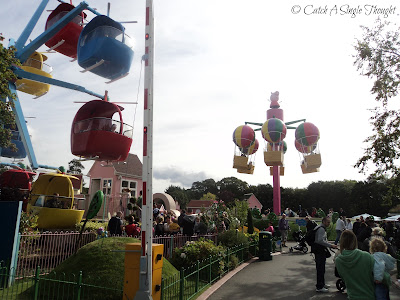 We then headed to Peppa Pig World along with a whole crowd of people.  I was worried that it would be packed and we wouldn’t be able to get on the rides but we didn’t queue for longer than 15 mins apart from when we queued for Mrs Rabbit’s helicopter ride when myself and Meg stood for 45 minutes.  It’s an incredibly slow moving ride and a bit of a shame really as queuing isn’t a toddlers forte!!  I can imagine it would be chaotic in the school holidays.

Peppa Pig World was absolutely perfect for our two.  I was so so impressed with how clean everything was, and how friendly all the ride operators were.

The indoor play area was fantastic although the under 2’s area was a little small.  I loved the instrument section they had there though and Eli kept everyone entertained with his piano playing which was broadcast throughout the soft play!

I also thought the outdoor play area was brilliant.  My OH observed that it’s not often you find a play area with toddler sized climbing frames.  It was perfect for Eli to master himself.

Unfortunately one downside we found is that there are no gates.  I saw several mums on their own with multiple children and I can imagine it would be difficult to keep your eyes on all children at all times in an area where they are encouraged to run around and explore.

Having the added security of knowing the entire area was enclosed would mean a lot I think.  There were two of us and at one point we did turn around and realise we’d lost Meg.  After a few minutes searching we found that she’d actually run out of the play area and was wandering around the part that was fenced trying to get back in! 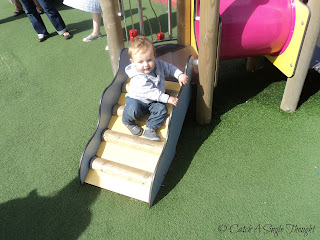 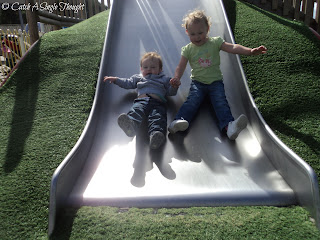 Once we’d exhausted the delights of Peppa Pig World we headed into the rest of the park.  This was pretty much deserted.  Quite often we were the only ones on the rides!

Again though, everything was well kept and clean and there was lots for Meg to do.  Eli found his dream ride in the form of the diggers and would have spent the rest of the day driving round and round if he’d been allowed! 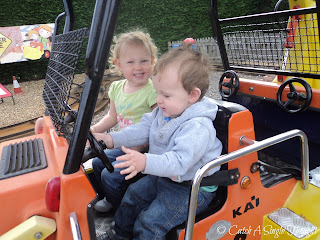 If you’ve read my previous post you will know that Meg was so thrilled to be at Peppa Pig World that she broke out into a spontaneous dance.  For us, it was a massive win!

I can’t comment on the cost or quality of the food as we took our own picnic but there are plenty of options available if you did want to purchase food and drink whilst there (although several of the stands and a few of the rides were closed).

I would definitely recommend this as a day out if you have toddlers!  But, probably best to try and go in term time!

And if my glowing review hasn’t yet convinced you, here are a few more photos of our day: 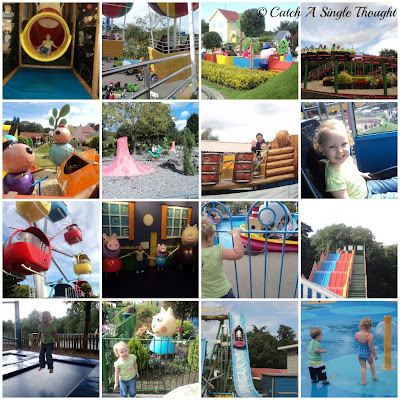 Please note, I have not been asked to write this review, it is simply my own opinion of our day out.