When Meg was 3 months old, we went on holiday to Spain with my parents.  In the build up to a holiday with a baby, one of the issues we obviously had to tackle was that of her passport.

I did a limited amount of aimless reading research on the internet trying to find out the best way to get a photograph we could use for her passport.  To this day I don’t know why I didn’t think to look on the Direct Gov website as that would have told us everything we needed to know!

Instead, we found a website who would print any image onto passport sized photo paper so one morning, armed with a white sheet and a semi-compliant baby, we set about trying to obtain a decent shot.

Of course, anyone who has a passport for their baby will know that as long as they don’t have a huge dummy obscuring their face or someone else in the photo with them then they don’t even need to have their eyes open.  But at the time, we didn’t know that and so we spent a great deal of time trying to capture one with Meg’s eyes open, looking straight at the camera.

I think it took us well over an hour to get a photo we were confident could be used.  And a whole load of photos that couldn’t!

However, we did end up with my favourite baby photo of Meg ever: 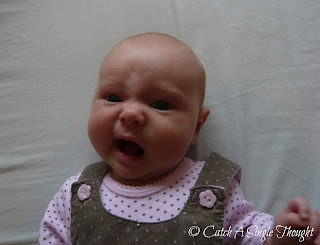 I love the expression on her face.  I can just imagine her thinking “Erm guys, I don’t know what this big black thing is that you keep waving in my face but I wish you would stop cooing at me and trying to make me look at you!”

Unfortunately I was overruled by my Other Half at selecting this one for her passport!

This blog post has been written as an entry into the Tots100 competition in association with Boots Mother and Baby.