How Clean Is Your House?

I hate cleaning, really really hate it.  I can’t think of any worse torture than having to spend the entire day tidying, hoovering, dusting and disinfecting.   It makes me shudder.

And this was all very well when it was just me.  I liked to live in a certain amount of organised chaos which went through stages.  Slowly I would allow the mess and bits and pieces to build up but it would still be very organised and I would know where everything was.  Then after a week or so it would all become too much and I’d spend a few hours sorting it all out and repeat the process again.

But now, now I have a husband and two small children and my house feels like it’s in a constant state of turmoil.  Little hands move and adjust things so that when I recall the last place I left my keys and return to it, they have been moved.  My Other Half is the ‘leave everything until it needs to be done’ sort of person and so makes ten jobs out of one.  He will move an item to mere inches from it’s proper home to be put away properly at some point in the future.

I have become a woman who hordes too, little tasks I put off ‘until later’ have just remained undone as life has carried on and I’ve never found those few minutes to return to them.  Life with two small children is just so unpredictable that when I do get precious minutes to myself I’d much rather stick my head in a book and transport myself off to a place where there aren’t crumbs trampled into the carpet, a weeks worth of washing to sort out and I don’t find a half eaten apple core stuffed behind the TV unit (thanks to whichever one of my beautiful children thought that seemed like a good idea!)

There must be a way to achieve it though, a clean and tidy house.  I’ve visited friends who have children of a similar age and their houses are so clean and tidy.  How do they find the time?

This is more than just a case of a few toys scattered on the carpet, a few toys would be easy pickings, I seem to be raising children who have to empty three or four boxes of toys before they’ll settle to play with the DVD’s I’ve piled up so neatly on the bookcase or taking the batteries in and out of the television remote.

Is it just me?  Are you reading this and sitting in a pristine room thinking to yourself, “what is this woman moaning about?  I always find time to clean!”

Sometimes at the end of the day I just survey the damage and despair at where to begin!  I have decided though, to take baby steps and am going to attempt to reclaim some of the lost ground over the next couple of months.  Organisation is the key (I know it!!) so I’m going to make a plan and sort myself out!

But, for those days when it’s all just going wrong, I found this little gem of a poem which I’m going to emblazon in my mind: 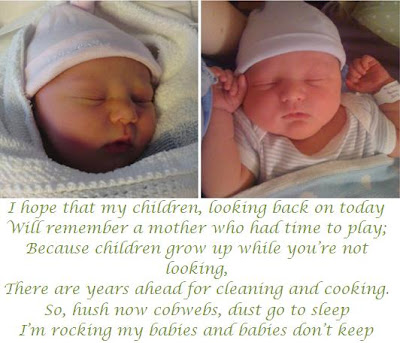 And I will try to remind myself that this isn’t forever and soon I will be packing away all the brightly coloured noisy toys in favour of small gadgets and teenager stuff *gulps back sob*  then I’ll be wondering when my two chubby little babies grew up and spend my time reminiscing about a messy house!

What about you?  Have you managed to find a balance between toddler chaos and having a clean and tidy house?