Review: The Land of Sometimes 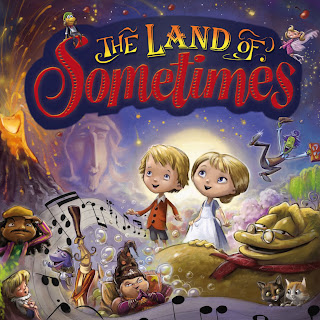 Every now and then you come across something which you just can’t stop raving about.  Something you tell everyone about even when it’s not relevant to the conversation.  The Land of Sometimes has become that thing for us.  My Other Half has even taken to playing it to unsuspecting family and friends.  We really love it that much.

If you’re sitting there, brow furrowed wondering why you haven’t heard of such an amazing thing then let me enlighten you.  The Land of Sometimes is an audio storybook which tells the adventures of twins Elise and Alfie as they travel through the Land of Sometimes, where four seasons pass in one day.  Each part of their adventure has an accompanying character and song.

At the moment Meg and Eli are a little bit too young to understand the complexities of the story, and I found that some of the language was used a bit optimistically if the target audience was younger children but as this is advertised as being for ages 2-99 I suppose it doesn’t matter too much!

I think my favourite thing about the music is that there are so many varying styles there’s a song for everyone.  Meg, naturally, loves Little Twink, the cheeky mischevious fairy who makes a mess whilst children sleep.  Little Twink has been blamed for a lot of emptied toy boxes lately!

My Other Half loves the Chant of the Chameleon Catcher and can often be heard giggling away to the lyrics when it plays in the car.  I’m not sure what my favourite song is, I enjoy them all.

We think the entire thing has been expertly produced and we would really recommend it for anyone with children.  It has been a refreshing change from the usual children’s songs we have playing on long car journeys!

It also encourages creativity in children, we’ve enjoyed having long conversations with Meg over what we think the characters look like (prior to looking at the illustrated booklet which comes with the CD and shows the island and the characters)  and what we think of the songs.  I don’t think it will be long before Meg’s making up dances for each song!

The only teeny tiny niggle I have is the difference in volume between the spoken story and the songs.  The story is incredibly quiet in comparison to the songs and we find we either have to have the songs really loud to hear the story or we have to turn the volume up and down all the time.  It would have been better if they could all have been on a similar level.

For children who enjoy the story you can also visit the website for some more interactive activities, such as exploring the map further or downloading colouring pages of your favourite characters.

I would love to see what else they have lined up for the characters.  Maybe a Land of Sometimes version 2?

With Christmas coming up I think this would be a perfect gift.  I already have several people in mind who will probably be receiving this from Meg and Eli!!  It costs £9.99 from the above website plus p&p and I really see this as a gift that will last and grow with your children.  We’ve had it for almost a month and we have listened to some part of it every day even if we’re just popping to the shops in the car.  At the moment the kids just appreciate the musical side of it but I can’t wait until Meg is a bit older and we can snuggle up and listen to the story together.  I think it’s brilliant tool for inviting children to use their imaginations.

Disclaimer: I was sent the CD for review purposes.  All opinions are my own and yes, we really do love it THAT much!