I’m sure by now you’re aware that Meg has a keen interest in reading, and talking!  But not so much with numbers…she can count to 10 which is fine but anything above that and we start to struggle.  Neither has she got the patience to sit and count things, she’d much rather be pretending to be a fairy or (probably more accurately!) a pirate and if you challenge her to count something she’s more likely to just pluck a number out of the air than try and correctly guess it.

Which, of course, is fine and I love that she is so creative when she plays but I have found myself wondering over the last couple of months what steps we need to take to help her prepare for school next September.  Obviously this will be a gradual process but it doesn’t hurt to consider it, does it?

So I was intrigued to see how Meg would get on when we were sent Hot Dots Jnr to review by Learning Resources.  The Hot Dots system is basically an electronic pen which can be used with a variety of sets.  Your child touches the pen onto the answer they think is correct and it either lights up red or green and has accompanying phrases or music.

We were sent the numbers and counting set which is aimed at 3-6 year olds.  When Meg first  opened the pack I thought the cards were really simple.  She’s at the lower end of that age bracket and she was dealing with them without any problems, but then she got further into the pack and the cards did get a good deal more difficult with her needing to identify the number written in word form.  Meg, of course, had very little chance of getting this right but it was interesting watching her trying each one and working out which was the right answer. 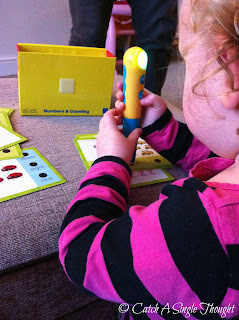 I really liked this set, we’ve had it for over a month now and Meg will still fetch it and sit quietly playing with it.  Eli also likes ‘joining in’ and identifying the different animals on the cards!

There are lots of different sets available from the Learning Resources website.  I’ve added a phonics set to Meg’s Christmas list as I think it’s something which will get well used.

Disclaimer: I was sent the Hot Dots Jnr Set to review.  All thoughts and opinions are entirely my own.