We have a little night-time trouble in our house.  It doesn’t happen often but when it does it’s random, certainly funny and a little bewildering.

The first time I realised it was in our lives was one evening around 10pm.  I suddenly heard a little voice from upstairs calling “Mummy, mummy…help”…I rushed upstairs to find Meg had pulled all of her drawers open and had used them as stepping stones.  She had one foot in each of the two smaller drawers at the very top, and was clearly stuck.  At this point she was awake so I assumed she’d just woken up and decided she wanted to reach something on the top of her drawers.

But then it happened again, several months later.  Around a similar time I heard banging upstairs and found Meg on her hands and knees in the bathroom.  I asked her what she was doing and said said “I’m just tidying up mummy…obviously”  Naturally I responded with “right, but you should actually be in bed” to which Meg said “yeah, I know, goodnight” and lay down on the bathroom floor.  I can remember picking her up and carrying her back to bed and she was snoring before her head even hit the pillow.

Off the top of my head I can’t remember another incident like it until last week when we heard her come stumbling out of her bedroom, hair all awry and plastered to her face…eyes wide open, muttering about “joining in with everyone’s game.”  When I asked her what game she just frowned at me irritably and said “THE game mummy.”

It’s strange because in all of these scenarios she is aware which one of us is speaking to her, she recognises that it’s me and responds accordingly but she appears to be very much asleep. 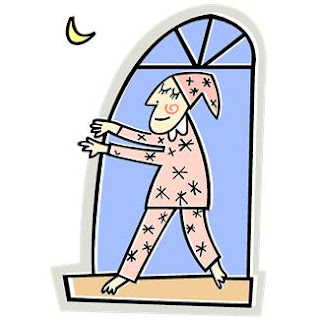 It doesn’t always involve actual sleepwalking either, quite often we will hear her shouting out random things in her sleep.  It’s more of a shock when you hear her bellow something down your ear and realise that at some point during the night she made it into our bed.  I’ve had several near heart attacks that way!

I have a friend who used to sleepwalk and would often try to open the front door and get out of her house.  That kind of thing makes me worry about Meg.  At the moment we make sure that the safety gate at the top of the stairs is always locked but if she was determined I’m sure she could quite easily get it open.  And whilst it is amusing, it can certainly be nerve-wracking too to think she might accidently injure herself during an episode if we aren’t there to guide her back to bed.

I have done a little bit of research on the subject and it doesn’t mean that she is emotionally or psychologically unstable (phew!) and could be caused by a number of different reasons although no one really seems to know definitively what causes people to sleepwalk.

The BBC recently ran an article which featured strange things people do when sleepwalking.  Most of them involve people doing things in the nude, I can’t help but wonder if there is a particular reason for this or perhaps more of the population sleep pyjama-less than I imagine (or like right now, try very hard NOT to imagine!)

Apparently around 15% of all young children will sleepwalk at some point.  It’s been heard of for some children to sleepcrawl too!  Is there anyone else out there who has a nighttime wanderer?  I’d be interested to know if children grow out of it or if we can expect this to be around for the next decade or so of our lives!