This year we decided to stay at home for Christmas, just the four of us (plus Alfie and Peppa of course!)

Last year was total present chaos with Meg just becoming completely overwhelmed, ripping wrapping paper off any gift she could get her hands on, not bothering to look what was inside and accidently opening other people’s presents too.

In an effort not to have a repeat of that we decided we would stay at home and take things slowly.  On Christmas Eve we opened all the presents and made sure if they needed batteries then we’d put them in and there was no awkward packaging to undo so the kids could play with them straight away without having to wait.

We started our fun on Christmas Eve with new PJ’s for everyone and a Christmas book each for Meg and Eli.  We have decided that we will give the kids new PJ’s and a book each year from mummy and daddy on Christmas Eve and that way all the other presents we buy can be from Santa on Christmas Day.  At least for as long as the magic of Santa is present in our house! 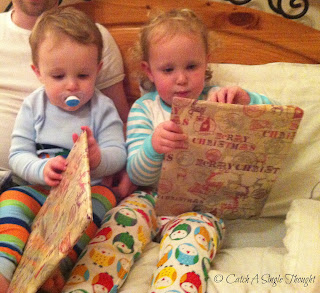 My mother in law had given us a lovely plate decorated for Santa from Meg and Eli so we made sure that Santa had some homemade cookies and milk left out for him under the tree. 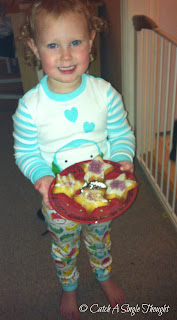 And finally we mixed some porridge oats with red glitter and left a sparkly path in our back garden up to our front door so the reindeer wouldn’t get lost! 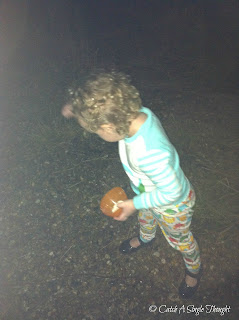 The kids went to bed surprisingly well, I don’t think that the concept of Santa and presents has really set in yet, other than us telling Meg it was Christmas the next day she didn’t have much expectation about what that would mean, which is obviously very beneficial at the moment!

The next morning the kids didn’t wake until 8.30am (woohoo!) so we had a leisurely time opening stocking presents before heading downstairs for a cooked breakfast and some bucks fizz (for mummy and daddy of course!) before sitting down to open our presents.  It’s a little concept of mine that we have to be dressed before we open tree presents and I think taking our time and making sure that we were all ready and had eaten before we let the kids near the presents worked well, it was certainly a lot calmer than last year.

We stretched the present opening throughout the day, opening a couple and then allowing the kids to play with them for a bit whilst we replenished our glasses and cleared up the paper.  I hope that we can continue this in years to come as it was really quite relaxing, not at all what I had expected.

There was a distinct pirate theme to our presents this year with Meg and Eli getting a pirate ship, two pirate dressing up outfits and a variety of other piratey bits and pieces, anyone would think we were fans! 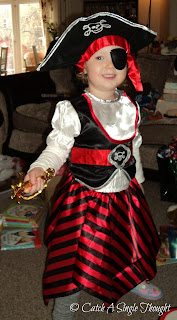 Alfie wasn’t left out either, we found some dog slippers at a local charity shop and wrapped them up for him.  Unfortunately he was so pleased with his gift that he managed to tear the slippers apart in just one day so I think next year he may need something a bit more hardy! 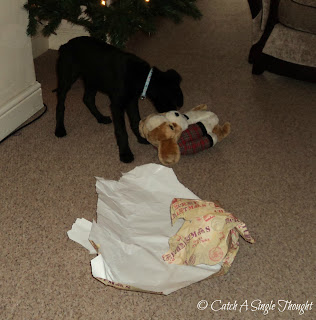 Around 2pm (after Eli had had his nap) we sat down to a mammoth Christmas dinner made by my Other Half.  I think a real Christmas dinner is when you can’t see the bottom of your plate and he definitely achieved that! 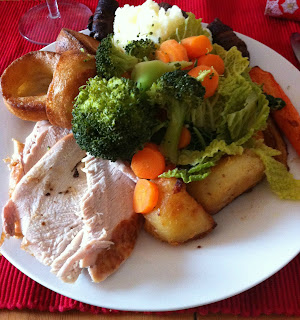 Finally, we saw my parents and sister for a short time, opened some more presents and gave the kids an early night before putting our feet up and indulging in some David Attenborough ‘Life of Mammals’ (a gift for my Other Half)…we know how to live on the wild side!

I had been concerned that this year would be the most chaotic of all with two children knowing what opening presents meant but actually it was far more chilled out than I had expected which was a lovely surprise.  I hope that next year it can be the same!

I hope you all had a lovely Christmas, here’s to a Happy New Year!! 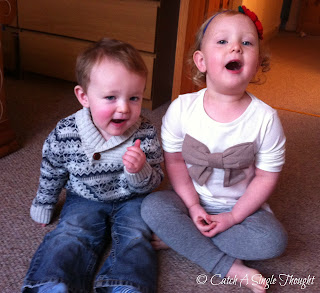