When I found out I was pregnant with Meg I didn’t know what to expect.  I don’t think I’d ever really paid attention to what pregnancy involved before.  The only memory I have is of a friend being pregnant and sitting on my sofa with her feet in the air as they kept swelling.  So in terms of the physical changes that would happen to my body, I hadn’t the slightest idea!

Somewhat naively I didn’t read any books about pregnancy and so each stage almost felt unexpected and new.  The thing I remember most is the wonder I felt when I sensed those first fluttering movements.  It was like being tickled from the inside and I knew without a doubt that it was the baby, even though it was earlier than most people had said to expect it.

It wasn’t too long before those flutterings turned into pokes and nudges, especially when I’d had something sugary to eat or drink!

I also had a very compact bump, whether this was due to the fact that I was walking 5 miles a day through most of my pregnancy or whether it was just good stomach muscles(!) I looked as though I was smuggling a football under my top for most of my pregnancy.  I suspect the former as I ballooned up once I started maternity leave and didn’t have to walk anymore!


The upside/downside of having such a compact bump was that I felt every single movement.  Meg was all elbows and knees and I would often wake up in the morning to a hard point poking out of my bump.

It really was an amazing experience of how life is created.  If I poked at the bump, later on in the pregnancy, she would nudge back.  I also love this scan photo we have of Meg sucking her thumb…who knew that babies could suck their thumbs in the womb…I certainly didn’t! 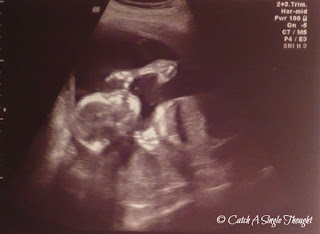 I captured this video when I was 8 months pregnant (incidentally the night before I passed my driving test!) and I am still amazed when I watch it now.  Watch closely!

It really was a case of baby saying hello, it’s just a shame it was about 3am in the morning!

I have to admit that I was completely fascinated when I first felt Meg kick.  There isn’t another sensation in the world I could compare it to.  I would happily spend hours watching my bump move and little limbs poke out of the sides.  Unfortunately I didn’t get this opportunity with Eli as my bump was much larger, much faster and I think he was swallowed up (plus he was a whopping 8lb 13oz compared to Meg’s 7lb 2oz so by the end I don’t think he had much space for wriggling!)

Although, I will say that it is not pleasant to have such a compact bump when a doctor decides at 38 weeks that your baby might be breech and proceeds to grip the hard lump he can see sticking out trying to determine if it’s a bottom or a head…possibly one of the most nauseating moments I’ve had, and it hurt too!

I can forget the heaviness, swelling feet, aching back and all the other lovely things that come with being pregnant when I remember the warm feeling it gave me to feel my baby move!