Over the past few months we have put the 360 Toddler Anyway Up Cup through a rigorous set of tests.  I was sent the cup back in the summer but was a bit hesitant to post about how we found it then as I was really interested in whether it would stand the test of time. 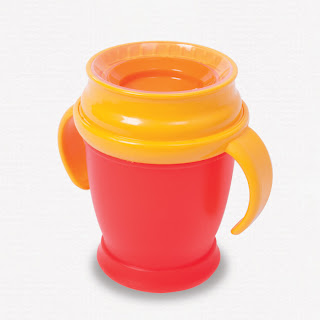 We seem to go through toddler cups like there’s no tomorrow, either the straws snap or they stop connecting properly, or we lose them or they have parts that are difficult to clean and over time they just become, well, disgusting!  So I was interested to see how the Anyway Up Cup would compare.  Particularly as it’s not easy to take apart…I wanted to know if the valve section would become un-useable after a period of time.

The answer, in short, is that it has lasted through all of our tests.  It has been dropped and thrown (and it really doesn’t spill!), it has been washed every day since we’ve had it and is still in a pretty good state.  We’ve had a couple of cups where the insides have started to blacken after a while (gross I know!) but we haven’t had that.

I have also had so many compliments on the style.  Just last week I had left Eli in a creche group and one of the ladies there was exclaiming over how she’d never seen a cup like it, wanted to know how it worked and whether Eli had any problems with it.  She was completely fascinated and impressed!

The recommended age for the cup is 2 years+ but I was keen to let Eli try it out as Meg drinks from ‘normal’ cups now and he is forever tipping hers over in an attempt to be like his big sister.  The reason I like the cup is that it appears to be just like a normal cup but with the addition of the non-spill lid.  To begin with we experienced a bit of frustration as he couldn’t work out how to drink from it (having only ever used toddler cups with straws before) but once he’d cracked it he wouldn’t even contemplate going back to the other ones.

I tested it out myself to see how difficult it was and you do have to apply a certain amount of pressure before the valve system works, which can be tricky for a toddler to grasp if they’ve not had to drink that way before but Eli did get it eventually.  I think watching me drink from it convinced him that it could be done and he persisted until he got it right!

I also like the bright colours, it’s so easy to spot it in a busy room.  We have misplaced it a few times when we’ve been out and about but I’ve always known it on sight.  There aren’t too many other cups out there which aren’t just the generic blue and green for boys and pink for girls (in my experience!)

The only downside I have found thus far is that for the first two or three uses it did leak.  Now I’m not sure whether we weren’t screwing the lid on tight enough as if you use it now you can tip it upside down and nothing spills but we did have a wet changing bag the first few times we took it out.

Also, if your toddler is a tinker and enjoys banging and clattering things, particularly at dinnertime and decides to bring his Anyway Up Cup down onto the table top with force, it will squirt water out and he will get wet.  Which, if he’s anything like Eli, he will enjoy profusely and will repeat again and again until said cup is removed from his little grasp.  But I wouldn’t expect any cup to be completely foolproof and if your child is quiet and demure and not given to showering himself at any given opportunity then you will probably have no issues at all with this!

All in all I am really pleased with this cup and would recommend it for all toddlers.  The handles make it easy for them to hold onto, it’s brilliant that it’s non-spill and I think they really do believe they are drinking from a cup just like mummy and daddy and older siblings.  I am hopeful that it will also make the transition to a normal cup easier as it will require the same sipping motion as the 360 Cup.

Disclaimer: We were sent the 360 Toddler Anyway Up Cup for the purpose of this review. All thoughts and opinions are my own.