Single Thought of the Week: Childhood

Last week I attended a session for parents called “Inspire A Generation” all about encouraging and inspiring our children for the future.

One of the main things I got out of it (although not at all the main purpose of it!) was that more and more our children are losing their right to be ‘child-like’.  The guy leading the session often visits and teaches in primary schools and he told stories of some of the children being aware of current news events such as the horrendous rape that took place recently in India.  Now I’m not casting aspersions on what parents may or may not choose to tell their children.  I know it was a big issue for some on whether or not to tell their children about the tragic shooting in America – and I’m not here to comment on that.

What it really made me think was how can we protect our children when they are growing up in a world where they are bombarded with adult agendas?  I know for certain that when I was growing up I never once sat and watched the news and would have been completely unaware of ‘current’ events unless they involved the boyband 911!

Do our children even get a ‘childhood’ any more?  I suppose you have to then look at what childhood means.  To me, it means experiencing new things and learning, but also getting into scrapes and mischief because you are simply acting on an instinct.  Having the freedom that comes with not knowing about responsibility.

When Meg is excited she goes wild.  Literally body-shaking, boogie dancing, wild.  She shows her elation physically and with loud whoops and squeals.  Completely without embarrassment.  I wish I could show my excitement that way but I fear I would look like I’d lost my marbles! 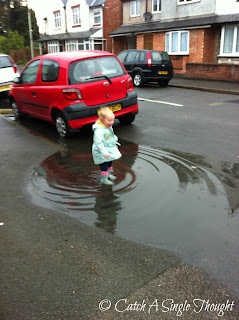 That to me is childhood – no inhibitions, no social stigmas, no responsibility.  Just freedom.

I don’t want my children growing up in a world where they know fear because they’ve been introduced to a subject too early and whilst they grasp the basis of it, they don’t have the wider capabilities to truly understand.  Their worldviews are so narrow and immature, they can’t really fully understand something of that magnitude.  I think if Meg came home and asked me about a current news event in the next couple of years I would, quite frankly, be shocked.  Should I be or is that just the old fashioned part of me showing through?

I grew up in a tiny village where everyone knew everyone.  Quite often we would get home from school, dump our bags and then just run off to wherever we felt like.  I don’t know whether my parents knew what we got up to but we didn’t have a care in the world.  As long as we were home before curfew then it was fine.  We didn’t have mobile phones so my parents couldn’t call us to find out where we were, they just had to trust that we’d turn up again!  I’m not that old, but I don’t know whether my idea of childhood is now vastly outdated.

Then there is the whole issue of technology.  With  so much computerised equipment around kids can access information like never before.  If they want to find something, they can.  Has that impacted on what childhood looks like?

I’m all for the use of technology, heck at 20 months Eli can unlock my iphone, select the box which has games and then choose the one he wants.  He can also turn on the camera and flip it so that he can see his face.  At 20 months!  I don’t even think Meg was that advanced at his age.  But I do worry about what it will be like for him growing up.  Will he be one of those children who just sits with his face squashed up against a computer or television screen playing games?

I have a very vivid memory of visiting London Zoo before we had children and seeing a little lad in a pushchair with headphones in playing on a Nintendo DS.  At the zoo!!  I vowed there and then to my Other Half that our children would never be like that.

Times have changed even since then and I have to admit that I have softened my view somewhat.  I do think it’s important for us to not hide or deny technology from our children.

But at the same time I want my children to be more interested in rolling in the mud (so long as they don’t come near me afterwards!) than what the latest computer game is.  I want them to spend their time climbing trees and building dens and getting up to no good.  But the wholesome kind of no good where as they look at the floor and scuff their toe, their cheeks are ruddy from the exertion of running around outside. 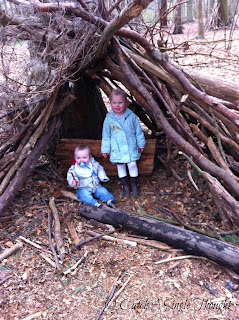 That’s exactly what my childhood was like but now I’m beginning to wonder whether that’s too idyllic.  Will that be the childhood that Meg and Eli experience? 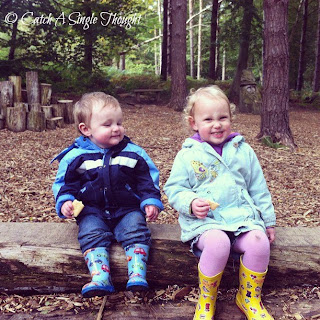 Should I just embrace the natural progression of things and accept that childhoods just aren’t the same anymore?