It’s funny how other mums always tell you that when you’re in labour you’ll just “know”.  If I’m honest I really didn’t believe them and spent the last three months of my pregnancy convinced it was happening every time I had a bout of braxton hicks.  I even went as far as timing some of the episodes when I thought they were coming regularly!

But, as it happened, when it did all kick off I definitely knew about it!

The Saturday before I went into labour I had the worst back pain.  It was so awful I spent the day alternating between being in the bath and lying on our bed crying.  My due date had been the day before so my Other Half even went as far as to call the labour ward to see if they could offer any advice.  We were told it was “probably early labour” and to just wait and see.

Wait we did, for the entire day!  By the time Sunday rolled around everything had settled down and gone back to normal.  No back pains or anything.  I probably should have twigged that this was the calm before the storm.

At the time my Other Half was working in Burnley and couldn’t drive so he usually got a train back up on the Sunday afternoon, which took him about 8 hours.  Sometimes though (usually when I begged!) he wouldn’t go home on Sunday but would get up incredibly early on a Monday morning and head up then.

This particular Monday morning I had woken up at around 3am, my Other Half had stayed and was planning to leave at 4am.  I managed to get to the toilet, notice a bit of spotting and get all the way back to bed before I realised something was happening.  Something intense and painful!

At first I wasn’t sure if it was labour, on timing for a few minutes I realised the ‘contractions’ were coming every 4 minutes apart which isn’t what any of the books had said would happen.  I remember dithering next to my Other Half who was still snoring away wondering whether I should bother to wake him up or whether he would think it was all a ploy to get him to stay at home a bit longer!

Eventually I did wake him, we called the labour ward who asked if I felt able to stay at home for a bit longer.  Cue some very angry shouting from me and they said to make our way in.  We called our very lovely friend who came with her 8 week old baby at 5.30am in the morning to drive us the half an hour to the hospital (we will owe her forever!!)

I remember that despite all my careful planning we left home without any of the snacks we’d put aside.  I did remember to take a large bottle of juice out of the fridge but managed to lose it somewhere between arriving at the hospital and getting onto the labour ward.

I was quite pleased when the midwife examined me and said I was 6cms dilated.  At least it explained why everything felt so intense!  I was set up on a ball and given some gas and air.  At this point it all got a bit panicky.  The midwife left the room to go and check on another mum.  My Other Half left the room to go and get himself a drink.  I was sat on the floor with my gas and air when suddenly I felt sick.  I’d completely forgotten the midwife’s advice that I had to continue breathing the gas and air through the nausea and eventually it would pass so I attempted to haul myself across the room to the sink to be sick.  When I was halfway there I was hit by another contraction and became trapped between trying to get back to my mouthpiece and continuing on my journey to the sink.  Naturally I did what any woman in labour would and stood in the middle of the room and let out a bloodcurdling scream about WHY I WAS IN LABOUR AND ON MY OWN!

In flew the midwife, in flew my Other Half and I demanded an epidural!

At the time I was upset that I hadn’t managed to ‘do it on my own’ but looking back it was the best decision I could have made to have an epidural.  Everything went from being crazily stressed to being nice and relaxed.  I even managed to have a little sleep whilst we waited for me to reach 10cms.

The thing that really sticks with me about my first labour is the expectations I had.  I listened to a lot of opinions beforehand about what I should do and how it should be and I made some very strong statements on my birth plan such as “I will not have an epidural” which left everyone very confused when I started demanding one.  The second time round I didn’t even bother writing a birth plan and I wish someone had told me to just do what felt right for me.

It left me feeling like I’d somehow been robbed by not having the perfect birth.  I suppose I had pictured my labour as going a bit more smoothly (there wasn’t any OBEM to watch beforehand to prepare me!) I didn’t imagine that I would shout at the anaethestist and accuse him of being a character from Scrubs, I didn’t imagine I would terrify the male nurse who came to put my drip in so much so that his hand was shaking.  I didn’t expect that my Other Half would almost faint and the midwife would tell him to get out of the way as they didn’t have time to deal with him.  I didn’t expect that my daughter would present as a compound delivery with her elbow literally dragging it’s way down and I didn’t expect that I would have severe second degree tearing because of it.

But…when this little chubby cheeked wide eyed baby made her appearance I did fall in love instantly.  And it almost makes all the rest of it worth it (almost!) 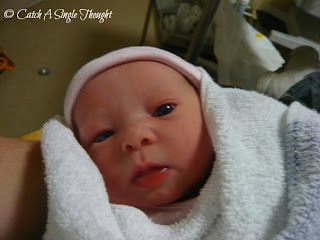 And heck, I did it again so it can’t have been so bad can it?