Win a personalised cwtchie and bib set from Stepford Stitchers

I have always admired people who are gifted with fabric and sewing machines and making pretty things.  Always.  I’d love to count myself as one of their number but I don’t think I would have the patience, time or skill – I’d be great at picking the beautiful fabric but I think after that I’d come quite unstuck!

So I was really pleased when I started seeing photos posted on my twitter timeline of bibs and dresses and dungarees.  If you aren’t following @optforoptimism and you want to while away hours looking at nice things then you really should be!

With the advance of social media and the like there seems to have been a rise in the number of pages advertising for bespoke items.  We’ve had some good experiences and some bad, unfortunately, but I can honestly say that the things we’ve had from Stepford Stitchers have all been top quality.  I also think that Sophie is great, when I haven’t really known what I was after (“just something pretty” being one fine example!) she was happy to make suggestions as to the fabric choices.

Sophie makes quilts, cwtchies and bibs (amongst other things) under ‘Stepford Stitchers’ and in March will be launching a Bespoke Baby Boutique called ‘Puddles & Petticoats’

So far(!) she has made me two minky backed patchwork car seat blankets which the kids have carried everywhere since they arrived.  I have had so many people stop and ask where we got them from it’s unbelievable.  Here is Meg modelling hers: 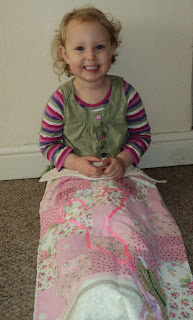 Then she made two of the most gorgeous dresses for Meg.  The design is brilliant and really suits Meg’s body shape but Sophie also makes a number of other styles.  As I said, she isn’t officially launching her clothing range until March but I know several people have already ordered and received dresses from her.  I will certainly be getting more before our holiday this summer.

We also won a cwtchie and bib set on her Facebook page competition which Sophie made in a fabric of my choosing.  The cwtchie is minky backed which has to be the softest material ever.  Ever.  I wish I’d known about these when the kids were smaller.  Although actually our house would most likely be full of them and my Other Half would probably be rocking in a corner so maybe it’s for the best! 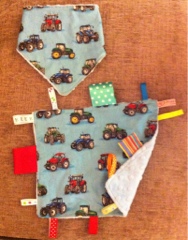 If you have a baby, I would 100% recommend one.  Eli usually carries a muslin cloth around with him but this has been cast aside unceremoniously for his new ‘dacta’ cwtchie!  It’s gorgeous and I love that she has stitched his name on the back.  When a child at soft play took it this afternoon to show his mummy there was no way she could not hand it back to us! 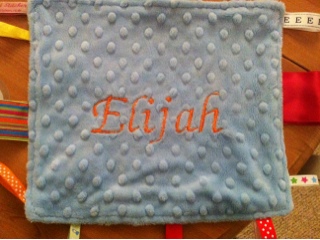 I also really like the taggies that are attached all around, I think for a younger baby the colours and textures would attract their attention.  Meg has also been fascinated by it, especially the tag which has the letter ‘E’ on it, she keeps proudly informing Eli that it’s ‘his’ letter.  She has also asked for one to match her new blanket but I think she may be a bit old!

This post may come across as gushy (no, I’m not getting a discount for every nice thing I say!) but sometimes you happen to find something that you really like.  I really like the stuff that Sophie makes.  I like that Meg will be one of only a handful of girls wearing a dress like the ones above.  I like that Sophie is friendly and approachable and doesn’t make me feel like a stalker every time I admire something she has made.  I like that when I asked her if she could make the dresses she sent for Meg a bit longer so they would last the summer she said “yes, send them back” without any issues.  I just like it!

Whilst I’m busy drawing up orders of beautiful dresses and playsuits and thinking of fabrics for Eli’s dungarees, Sophie has very kindly offered a cwtchie and bib set for someone to win!

If you would like your child to be the proud owner of a lovely personalised cwtchie and bib set (can you tell I’m a fan yet?!?) just use the Rafflecopter below to enter.

In the meantime, why not check out some of the other things Sophie makes, just be prepared to spend a couple of hours daydreaming afterwards!

Disclaimer: I have received no payment for running this competition.  All thoughts and opinions are my own.