One of the few films that Meg will deign to watch once it becomes obvious that it’s a ‘film’ (Peppa Pig doesn’t count as that’s a DVD, apparently) is Madagascar.  We watched it for the first time when we were visiting some friends and Meg was immediately enraptured with the song of King Julien, yes you know the one, “I like to move it move it” 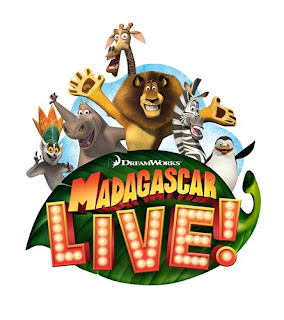 So when we were invited to watch the Madagascar Live! show in Nottingham I absolutely couldn’t wait to take Meg along!  We were given 4 tickets and as there was no way on earth Eli would sit still for something like that, Meg decided to ask her best friend Ben and his mummy along too.

I have to admit I was a bit dubious about whether Meg would manage to last for the whole show and she did fidget a fair bit, mostly because she didn’t understand why she couldn’t get up on the stage and join in (I think we need to get her enrolled in stage school pronto!) but I thought it was amazing.  At some points I honestly thought the performers must be miming as their singing was just unbelievable.

The show  is based on the first Dreamworks film and features all the main characters; Alex the Lion, Melman the Giraffe, Marty the Zebra and Gloria the Hippo as well as the penguins! I’m not as familiar with the first film as the second but I’m pretty sure it didn’t differ too  much.

There was also some audience participation which was hilarious, I don’t think either of the people who were picked on had expected it and just gave the straightest answers, but then, what do you expect when you’ve got front row seats!?!

I was sure prior to going that I had read it wasn’t suitable for children under 3 and although I did see a number of families with smaller children I’m glad we didn’t bring Eli as I agree with that age limit, it was just the right length of time for Meg to concentrate without wanting to leave but not so short that it didn’t seem worth it!

And of course, the best bit of all was King Julien’s “Move it move it” magic, the song appeared two or three times and each time the kids went crazy.  I don’t know what it is but there’s just something about that song which seems to capture them.  I particularly enjoyed it at the end when everyone in the audience was asked to get up and join in one last time.  It was very good and most people seemed up for it!

The show still has a couple of tour dates left, one of those being at Wembley Arena.  If you can get tickets and get down there I would thoroughly recommend it.

Disclaimer: We were sent 4 tickets to Madagascar Live! for the purposes of this review.  All thoughts and opinions are my own.