A Spot of Snow

Last weekend we had the pleasure of visiting Oswestry right when it was due to snow.  A quick look at the weather forecast actually showed that Oswestry was pretty much at the centre of the biggest downfall so taking our lives into our hands (not really!) we travelled the two hours through the snow with minimal trouble; we only had to push one car up the lane to our accommodation!

It snowed all through the night on Friday and the next morning I was astounded by the total whiteness that surrounded us.  I have never seen that much snow, and I grew up with the moors just a hop, skip and a jump away!  My dad later confirmed that it’s been around 30 years since he had seen that level of snow.  It was truly amazing. 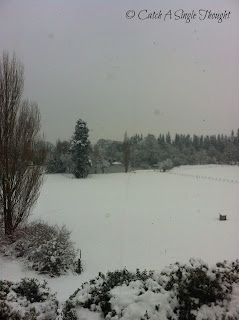 The minute Meg saw the snow through the window, she was determined that she was going to go out and play in it and that she was absolutely going to make a snow angel (her current favourite book being Charlie and Lola ‘Snow is my favourite and my best’)

It continued to snow throughout Saturday but we didn’t let that put us off, Meg was positive she needed to make her snow angel so we got ourselves wrapped up, pushed our way through the very deep snow and found a place where she could drop onto her back and make angels to her merry delight.  The look of joy on her face was brilliant, personally I would have hated to have a cold wet back but she loved it! 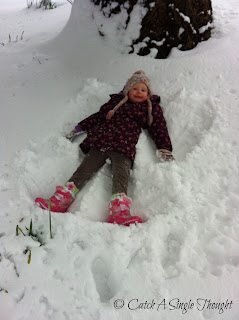 We also decided on the major task of making an igloo.  We borrowed a shovel from Grandad and with the help of some friends and my Other Half’s expert engineering opinion we made a little fort.  Unfortunately the children all lost interest before it ever gained a roof but we still had fun playing out! 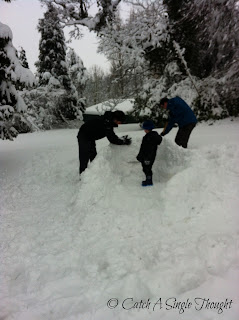 I don’t often enjoy playing out in the snow but even I have to admit that I don’t know when we’ll see so much snow again so I wanted to take advantage of it.  It didn’t seem that cold either although when I was hit in the face by a snowball which slowly crept it’s way into my clothes I did have to retreat back inside (and I will not be forgiving the thrower of that snowball easily!)


All in all it was a fabulous time.  I don’t think we could have asked for more adventurous weather.  Not the weekend we had planned for but lots of fun nonetheless.

Just a shame that the next day our snow fun consisted of digging our cars out so we could go home!