On Saturday we picked up Meg’s first pair of glasses.  I had taken her the week before to get her eyes tested as I was having mine done anyway.  The optician said that her long distance sight is better than most children of her age but that there was a slight prescription for short sightedness.  This, coupled with the fact that she had tripped over a chair leg as we walked into the room, made him suggest we trial a pair of glasses for 4 months to see if it helps Meg with her clumsiness.

Meg was very excited about getting to choose her new glasses and had been asking all week when we would be able to go and pick them up.  The staff were brilliant at the fitting, they kept telling Meg how pretty she looked with her glasses on, which is nice in a way, because not many children Meg’s age wear glasses (I can’t really think of anyone that we know in fact) and I can see that they were trying to make her feel special.  Walking back to the car from the opticians we had lots of people stopping us and commenting how cute she looked with her glasses on.

I did have one slight concern later on that day though when Meg came and asked me if she was beautiful without her glasses on as much as she was beautiful with her glasses on “because of what the lady said.”  I understand why the staff were going over the top to make a fuss of her but I don’t want it to become a big thing that wearing glasses is different.  I don’t think she has that mind-set at the moment because my Other Half wears glasses, and now I do too (yay for me!) so she just sees it as normal but I don’t want her to start to wonder why people are commenting all the time.  Glasses are just glasses.  I don’t want Meg to start feeling that she stands out because she’s wearing them.

We haven’t noticed any real change yet with her clumsiness, although she has only fallen over once whilst wearing them as opposed to three or four times a day!  They are still a novelty at the moment so the thing she enjoys most is taking them off and cleaning them and putting them back on again.

She has, however, taken to perching them on the end of her nose and saying things like “what’s going on here then?” or my favourite as I was drying my hair yesterday morning; she walked into the room, pulled them down onto the tip of her nose and said “what’s your problem?  I’m just trying to teach the boys and girls!” before flouncing out of the room.  I  have no idea where she has got that from, I presume something she’s seen on the TV!

She also keeps referring to herself as a “clever clocks” (she means clogs!) now she glasses.  I think this is something to do with Edmund Elephant from Peppa Pig although if memory serves correctly he’s just a little know it all and doesn’t actually wear specs.  And to be honest she was a “clever clocks” before!

Despite her extra cheekiness when she has her glasses on, I think she looks super cute in them.  And it is very sweet to hear her telling people that she won’t fall down and scrape her knees anymore now she has them.  It’s very adorable, although I will admit I’m probably more than a little bit biased!! 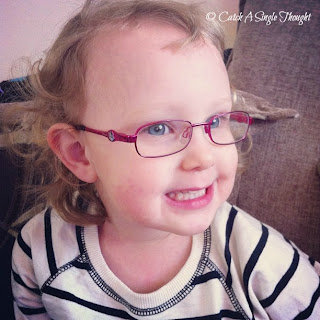