Last Sunday we managed to persuade my Other Half to pause the football at half time (it might have been Eli’s head constantly popping up into view, or Meg saying “I don’t like football” non stop or even my loud and continual sighing but either way it worked!) and we headed up to our local woods. 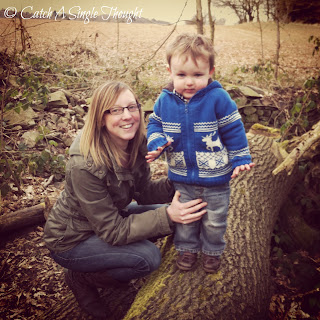 Spending some time outside makes such a difference to the way you feel.  I was starting to get cabin fever by the late afternoon but a couple of hours outdoors made it all good again. Not even the stress of Alfie escaping and almost getting flattened by a car could put a dampener on things!

The kids love the woods and we decided to make it extra fun on Sunday by giving them a bucket and encouraging them to fill it with things we could later use at home.  We did have to try and monitor it somewhat as we ended up with a whole host of pine cones and some mouldy looking twigs, but in the end we got a good variety. 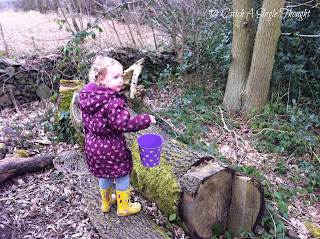 It also gave my Other Half a good opportunity to do some ‘teaching’, this week we all got to learn what bark is.  I’m not sure Eli was interested but Meg took great delight in telling us all repeatedly as we walked round! 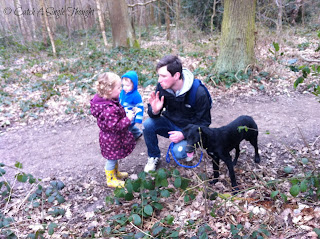 Eli’s favourite bit was when we reached the field on the edge of the woods.  It was brilliant watching the kids eyes widen at the sight of so much open space and then they just took off running. 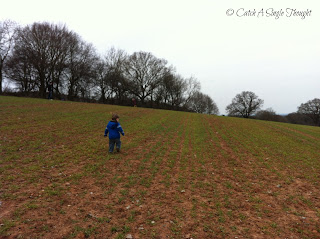 We spent some time wearing Alfie out and Eli loved throwing a stick for him.  He particularly enjoyed holding onto the stick until Alfie was bouncing around with anticipation and then blowing a raspberry as he threw it.  Oh to be in the mind of a toddler!! 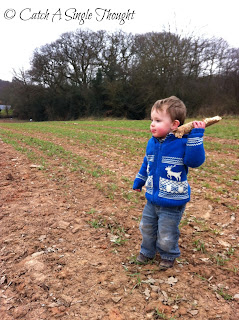 We finished our walk with a little long rest on a fallen log we found.  Meg decided to convert it into a train and insisted we all get on board.  Eli preferred just reclining and observing what was going on. 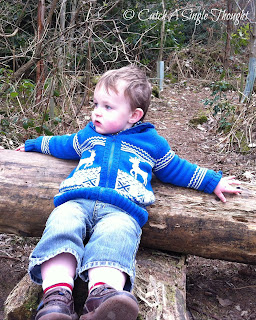 Later on in the week we rescued what was left in our bucket (who knew that dogs were such fans of pine cones?!?) and Meg had some fun sticking and making a little collage. 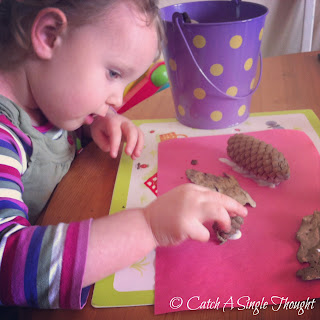