The Magic Moves Electronic Wand is an interactive light up activity wand from Learning Resources.  It has 90 physical commands and 26 random tunes.  The idea behind the Magic Moves wand is to encourage creative movement, motor skill development and listening skills. 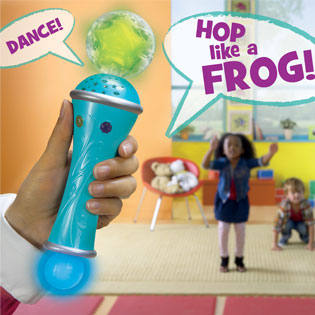 Both Meg and Eli have enjoyed playing with the Magic Moves Wand although the accent has caused some confusion over what action is required and I’ve had to interpret for them on occasion.  It has been funny listening to Meg try to copy the voice though – we get all the actions repeated in her attempt at an American accent!

We’ve had good fun talking through what the animal is, what it looks like and how it might move.  I really like this as it means we can take the learning further than the toy.  For example, when Meg heard the instruction ‘slide like a lizard’ she then wanted to know what a lizard looks like, where it lives and how it moves etc.  Which had all been prompted from the wand.  Some of the movements are also quite interesting – climb like a goat being the strangest one!

One of the most important things to me when buying a toy is the longevity of its ‘played with’ life.  If the kids are excited about it for the five minutes it’s fresh out of the packet but then forget about it after that then to me, that is not a good investment of my money.  The electronic wand sits at at the in between stage.  When one of them gets it out then it is played with frantically for a couple of days, then it is returned to its box for a week or so.  I don’t mind this as I know if I got it out for them they would enjoy engaging in the actions with me which is what it’s all about; getting children to have fun being active and so it’s a perfect rainy day toy.

Meg and Eli can burn off some energy even if we can’t go outside for long periods of time and it also challenges them to use their bodies in different ways; they have to make interesting shapes, try new sounds and think about what they are doing.

We also like the random element of ‘dance’ and ‘freeze’ intermittently placed within the movement commands.  Eli gets so excited when it’s time to freeze that we often repeat this even when there isn’t a ‘freeze’ command!

We have enjoyed playing with this toy and have had it for several months now.  It still holds Meg and Eli’s interest and although the recommended age is 3-7, I have found Eli very capable of copying the actions.  He obviously needs guidance in what it is he needs to do but this is also fun as it means that parents have to get involved too.

The Magic Moves Electronic Wand is available from Learning Resources for £17.94

Disclaimer: we were sent the magic moves toy for the purpose of this review. All thoughts and opinions are our own.