It feels like spring might actually have arrived, hurray!!  With the turn in the general temperature, the gale force winds excluded, we wasted no time in playing outside this week.

Don’t get me wrong, Meg and Eli love puddle jumping as much as anyone but there’s something nice about not having to get dressed up to the nines in waterproof layers before you can set foot outside your front door.  Being able to let them out into the back garden to play has been bliss!

We spent most of last week engaging in water play.  As it was still a little bit chilly I used warm water from the kitchen to enable their play to last a little longer and on two of the days I used washing up liquid to make the water full of bubbles which they both really enjoyed.  Meg’s favourite game was dropping the bubbles onto an unsuspecting Alfie’s back and shouting that it had started to snow and we needed to take cover! 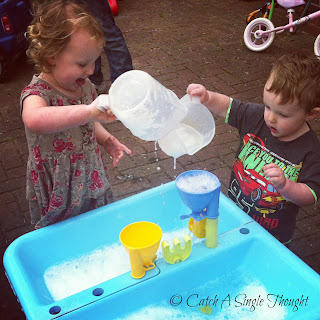 They also enjoyed going on ‘adventures’ through our not quite sorted out, still quite bramble filled garden, which was all well and good until Meg took a tumble head first into a patch and has been mournfully nursing her war wound ever since.

I couldn’t leave out this photo either as although it isn’t of the best quality, it is one of my favourite from the week.  Eli has such a cheeky grin on his face as he had just nabbed Alfie’s ball out from under his nose and was taking off with it.  Alfie, being the good natured puppy he is, was happy to trot along next to him until he threw it. 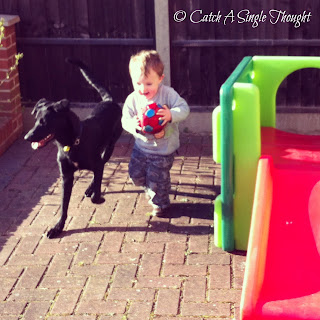 The best purchase of the week however was a long colourful ribbon I bought from Poundland.  Both the kids have had so much fun twirling and skipping with it, running with it streaming behind them and the somewhat risky game of each holding an end and one being dragged along by the other.  We will make rhythmic gymnasts of them yet!! 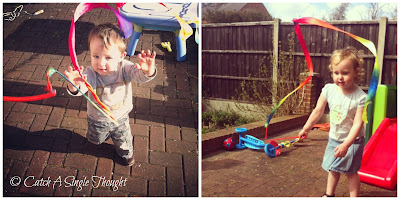 This time last year Eli wasn’t walking so I only had one child to worry about with scraped knees and elbows.  This summer it’s going to be twice as fun I’m guessing!

I’m linking this post up with Coombe Mill’s Country Kids.  For more fun outdoor ideas, check out the linky.