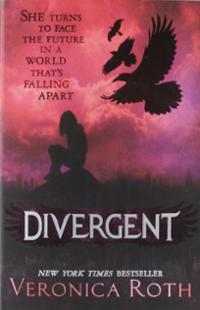 After my discovery of The Hunger Games last year, my love of the books being marred by the abysmal film that was made, I was hesitant to read another dystopian novel which was being made into a film.
This is book one in the ‘Divergent’ series by Veronica Roth.  The second book ‘Insurgent’ is out now with the third being released later this year.
It is about sixteen year old Beatrice who is living in a world divided into factions.  Each faction plays different roles within the community.  At the age of sixteen, all children undertake an aptitude test which determines the faction they are most suited to.  They don’t have to choose this faction and most children opt to remain where they are with their families.  Once they have chosen their faction, they must undertake an initiation process where only the top candidates are successfully received, the others become ‘factionless’ and are left to fend for themselves.
There are five factions: Candor, Abnegation, Dauntless, Amity and Erudite.  A divergent is someone who suits more than one faction and is considered dangerous (and therefore expendable!) in the community.
We follow Beatrice as she first chooses which faction to join, her discovery and subsequent covering of the fact she is divergent and what happens as the world around her begins to change and crumble.
I really really enjoyed this book; I thought that it outranked Hunger Games massively as I found Tris (as she becomes) a much more believable main character than Katniss.  I like the concept that in order to reduce conflict, people are separated out into a faction which best suits their personalities and abilities and I found it interesting to wonder which faction I would belong to.  I, personally, thought Dauntless but my OH reliably informed me that I am not as brave as I think I am and so probably would be better in Candor as I can’t help but say what I think!
The only part that I felt let the book down was the end.  There is a rapid succession of events, which I won’t reveal here as they are unexpected twists and I don’t want to spoil it, but they all happen within a few pages of the story and are left completely unexplained.  I haven’t read ‘Insurgent’ yet, and I do wonder if Veronica Roth will uncover more of the story but if she doesn’t then I think that is a big let-down.  The discoveries are just thrown out there and as a reader you are left feeling like you’ve missed a part of the story somehow.
That said, I thought the book was brilliantly written.  It grabbed my attention from page one and I read it an every opportunity I got in the days that followed.  If you liked The Hunger Games then I definitely recommend this book!