Having children born 2 years and 5 days apart in the same pay packet as our own birthdays means we don’t have much time to recover finances between birthdays. This puts us on a strict budget for any birthday party.

My challenge therefore, when Meg asked for a woodland fairy party was to achieve it at as low a cost as possible.  I definitely found this difficult as I am a sucker for beautiful sparkly things and spending a few hours of Pinterest didn’t help!

For location, we chose my parent’s back garden which is fairly wood-esque with it’s little pathways, narnia lamp post and gorgeous wendy house tucked away at the back.  My mum promised to decorate it with some brightly coloured crepe paper, so that was one job off the list!

For the invitations I made toadstools using card and paper we already had in the house.  I used a bowl to make my toadstool shape, tracing it halfway round.  I drew the stalk freehand and found a lid which made the right sized circles.  I drew around it, and cut them out.  I imagine you could buy stickers in the right size to save having to cut so many circles out but I wasn’t that fussed about using shortcuts! 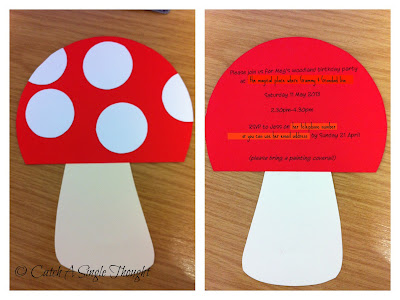 I decided to make some little toadstool seats for when we had our afternoon tea.  I bought some red mousemats on eBay and cut out white circles from card.  The children were the perfect age for this and loved finding a toadstool and making sure they were sat on it.  One particularly conscientiousness boy used his as a tray when we ate our  lunch which was very cute!

For the party bags I bought some brown lunch sacks, again on eBay.  I got 25 so will be putting them to one side and using them again next year.  I used some wooden pegs we had and created mini toadstools to stick on them.  For the small white dots I used the paper leftovers in my hole punch.  I labelled them up using some cute paper and white card we already had in the house. 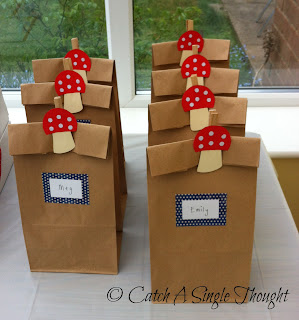 We were gifted a GIANT toadstool by a local photographer who had created it out of chicken wire and papier mache, it was amazing!  We decided to fill this with straw and I bought some little gifts to go inside for a lucky dip activity.  As the theme was essentially a garden party, I opted for these Little Gardener starter pots.  For £1.50 each I thought they were great value.  We had initially considered the foil gift bags you can buy which contain small toys and sweets, these were £1.10 and as children generally get enough sweets at a party we decided on the seeds.  I am especially glad we chose these as they became our stand-in party bag fillers too (see below!) 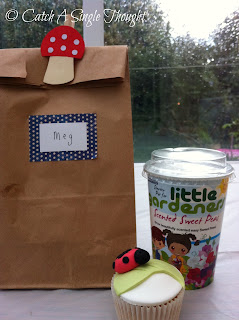 We also played a game of pass the parcel and I found a very cute gardening bag in Home Bargain for £3.99 which again, fitted in with our theme and was good value.  I added a pack of Ladybird Little Gardener seeds too.

My friend who runs Tashacakes made some gorgeous cupcakes which we used in place of a cake as I thought they were too cute to pass on! 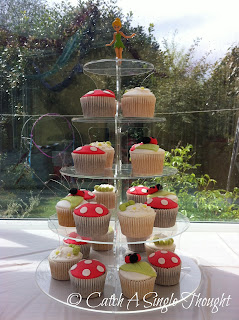 Unfortunately, the rest of the party didn’t quite go to plan.  The weather was against us (clearly, I had forgotten we lived in England!) and we had torrential downpours for most of the afternoon.  We also didn’t receive the bird houses we were going to paint as fairy houses from Baker Ross (that is a rant for another day!) so I will admit, and those of you who follow me on twitter will know, that I had a mini breakdown about 15 minutes before the party started; how on earth was I going to entertain eight 4 year olds for two hours?

Thankfully all of the parents stepped up, sending their children with wellies and coats and they had a mud-filled afternoon running round the garden in the rain, thoroughly enjoying themselves!

Perhaps not the idyllic tea party I had envisioned but Meg had no idea that her party was meant to be anything other than what it was and said to me afterwards that it was ‘the best party ever’ which made the whole thing worth it! 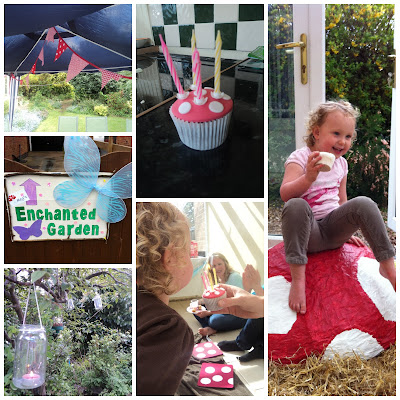