Pre-children I had a very definite idea of what kinds of names I’d choose when the time came to have a baby.  I was one of those girls who spent long hours fantasising about the beautiful, perfectly behaved(!) babies she would have.

When I actually found out I was pregnant though, picking a name seemed a whole different ball game.  We actually had to choose a name that our child would have for the rest of their lives.  It seemed like an awfully big responsibility.  If we chose badly then we could inadvertently cause our child a lot of unnecessary grief when they attended school, when they had to announce their name later in their adult life (I’ve seen people snigger in a meeting when a solicitor introduced themselves as FiFi) and maybe even cause them to change their name officially, so I saw it as a big job to choose well.

Then of course, it wasn’t just me picking a name out of the air.  There were the contributions my OH brought to the table to contend with.  We needed a name that both of us were happy about.

At 26 weeks, we had a 4D scan which confirmed we were having a girl.  This was a big help as up to that point we hadn’t been able to agree on any names we liked, for either gender, so at least eliminating half the baby names book was a step forward!

In the end we decided to each make a list of the names we liked, after the baby was born we would look again at the lists and decide what we wanted her name to be.  We agreed on the middle name being ‘Hope’ so it was just a case of choosing the first name.

Now you may or may not know that I am an incredibly strong-willed person and I had secretly already decided that the baby would be called Iris.  I knew my OH didn’t like this name but I did, and that was what mattered right?!?

My OH it seems, is also a bit of a sneaky one and had picked a name he was determined that the baby would have.  My labour didn’t exactly go to plan and so I was in no fit state to protest in my exhausted, drugged up state when the delivering Midwife said to us “…and have you picked a name for baby?” and my OH answered “Megan”, with only a quick sidelong glance at me.

I think I was cross for all of five minutes as I was much more interested in the squalling pink chubby cheeked bundle I had to look after!

Megan means “little pearl” and I have to admit that OH chose a good ‘un.  Looking at Meg now I can’t imagine her as an Iris, so maybe it wasn’t such a bad move on his part! 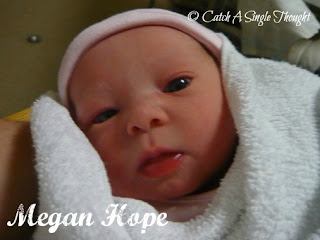 Second time round though, I wasn’t about to be fooled in the same way!  Again, we found out the gender of the baby and again, we both had strong views on what the baby should be called.

Now, some people will accept what I’m about to say and others will write it off as weird, but each to their own.  We had pretty much decided on a  name for the baby when I had a dream about what he should be called.

I woke up with an absolute conviction that we had to give him this name and I even went so far as to tell my OH that if something happened to me during labour, he had to stick with this choice.  Might seem morbid but past experience told me that he’d be likely to slip his preference of Arthur in there instead!

Perhaps the strange dreamings of a pregnant lady or perhaps something more, who can know?  The weirdest thing of all is that we were the first of ten other people that we know to pick the name Elijah or ‘Eli’ for short so maybe there was something in the air that night!

Elijah is Hebrew and it means “the Lord is my God” (it is also the name of Elijah Wood, who happens to be one of my favourite actors ever…but that has no relevance whatsoever…promise!)

I wanted his middle name to be OH’s name, as my brother’s middle name is my dad’s name and I quite like that as a little tradition we have carried on. 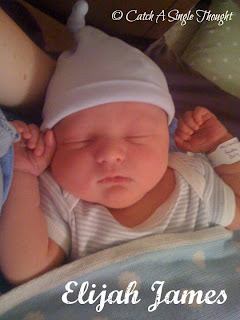 So there you go, Megan Hope and Elijah James.  Little Pearl and Gorgeous Blue Eyed Actor *ahem* prophet from the Bible.

Incidentally, I’ve had lots of people comment how similar Meg and Eli looked when born.  I took this photo yesterday which really shows off how similar looking they still are, they definitely get the cuteness from me, the gormless looks come from their dad ;o) 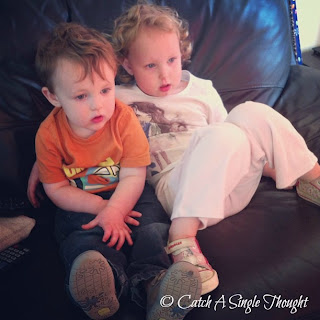 I’ve seen a couple of posts this week relating to baby name choosing and I find it really interesting to know how people pick.  Everyone has different ways; some people use family names, others pick them at random, some choose before they’ve even seen their babies.

How did you pick yours?