I was so excited when I was given the opportunity to take part in the sponsored challenge for Collective Bias® – who doesn’t love to eat chocolate?!?

I’ll be honest and say that I am happy to eat any kind of chocolate going, I’m really not fussed!  But when I was younger we were generally given Cadbury chocolate buttons as treats, so Cadbury does hold a certain element of nostalgia for me.

I decided to do my shop at Tesco as we have two of their superstores close to us and they usually have a good range of products.  You can see more of my shopping experience here.

I wanted to give Meg the opportunity to do some baking as she loves it so I decided to try out a new biscuit recipe and to use Cadbury chocolate buttons to make a sort of ‘thumbprint’ biscuit.

Cream the butter in a large bowl until it is soft.  Add the caster sugar and beat until your mixture is light and fluffy.

Form small balls of dough and place them on your baking tray.

Flatten with the back of a fork/spoon and bake in the oven for about 15 mins at 170C or Gas Mark 3.

It confused Meg no end that we weren’t going to roll out our dough and use cutters (me too to be honest) I wasn’t convinced it would work so I was surprised when the biscuits came out of the oven looking like biscuits!

I took the biscuits out 5 minutes before we needed to, to ensure that they were soft enough and then we used our thumbs to make small indentations placing the button in the indentation.  It did melt the button a small bit around the edges and so perhaps didn’t look as neat as I had hoped but my official testers didn’t notice and certainly no complaints were made at the dinner table later!! 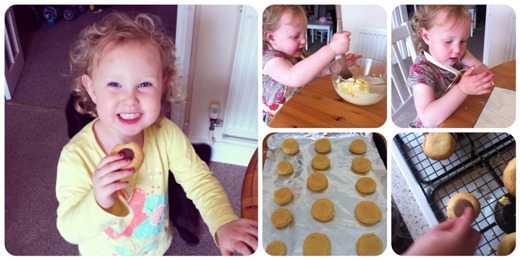 For the main creative challenge I wanted to try something different.  Having baked 5 birthday cakes in the last month, I am a little baked out!  I spent a bit of time thinking it over before my OH suggested having a go at homemade ice cream.  I knew we had a recipe somewhere in a book we’d been given once upon a time so I set about hunting it down! 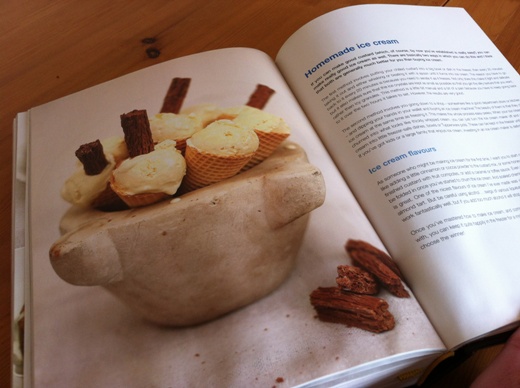 I was a bit dubious about attempting this without an ice cream maker and a quick search on Google didn’t help me feel any more confident but actually it’s really very simple to make without an ice cream maker, it just takes a bit more time and effort.  You pretty much make custard, pop it in the freezer and whisk it up every 20 minutes for two hours until it starts to solidify and turn into ice cream.

We made basic vanilla ice cream and then chopped up some of the Cadbury dairy milk bar to mix in as chocolate chips.  Here’s how we got on: 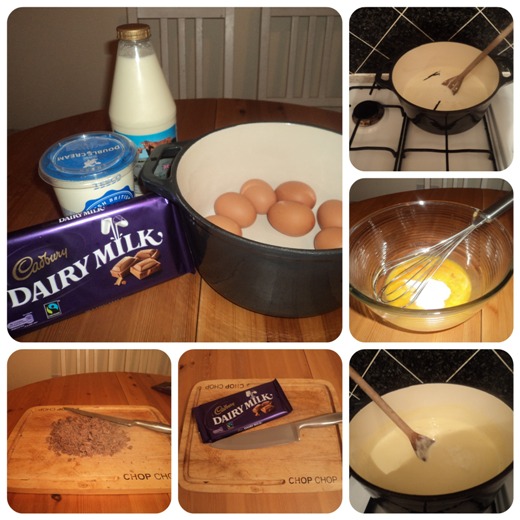 We let the kids decorate their ice cream with Cadbury clusters, sugar hearts and chocolate sprinkles and they seemed to give it the thumbs up! 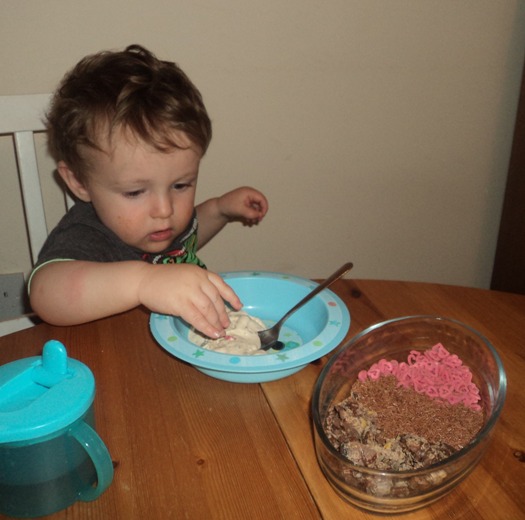 Disclaimer: I am a member of the Collective Bias® Social Fabric® Community.  This shop has been compensated as part of a social shopper insights study for Collective Bias and their client.