My second to last guest post is from Elizabeth.  Elizabeth is mummy to two children – a boy aged 7 and girl aged 4.  She started blogging back in January this year and enjoys sharing tales of motherhood, as well as trying her hand at poetry and short stories.

I’m so pleased to have this opportunity to guest post for Jess.  I love her blog and whilst you should never judge a book by it’s cover, it was the beautiful title ‘Catch A Single Thought’ that drew me to it in the first place, and I’m delighted it did.

As Jess will be off to warmer and sunnier climbs, she’s asked us to write about favourite holiday memories.

For the last 9 years, every summer we have travelled down to the same place in the far west of Cornwall – it has almost become an annual pilgrimage!  We stay in the same village of Marazion, near Penzance.

So what is it about being there that pulls us back each year?

To me there’s an air of magic and of mystery in West Penwith, this is inescapable.  Home to so many ancient village ruins, and stone circles, reminiscent of a time thousands of years ago when man and earth were so much more deeply and closely connected.  It’s possible to close your eyes and breathe in such calmness and tranquility, to feel the earth support you and reinvigorate you.

We have been going to Marazion since my husband and I were young(er) and had just starting ‘courting’.  Then it was us and the bump, then the baby, the toddler, the toddler and bump, the little boy and baby girl, and so on…

With so many holidays, and so many ‘seasons of child’, favourite memories could simply go on and on.

But here I am going to indulge in a pre-children memory…of our first trip, in the heady, romantic days of courtship.

Marazion sits on one side, and at the bottom of the hills that surround, Mounts Bay, so called because of the beautiful St Michael’s Mount: 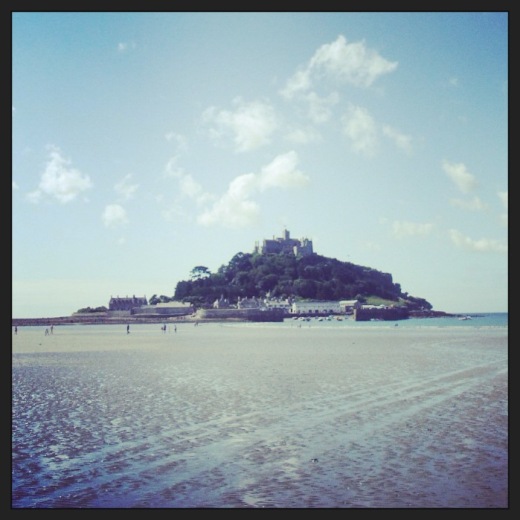 The intriguing castle on a hill, linked to land by a causeway that is only passable on foot at low tide.  To this day we haven’t been in the castle, although we explored the grounds, preferring instead to leave it to our own imagination as to what it might be like inside…
One morning, around 4.30am, I woke unable to get back to sleep.  My husband (then boyfriend) was snoring soundly at my side; this wouldn’t do!  I nudged him awake – looking suitably surprised when he woke – and told him I couldn’t sleep.  He had a moment of inspiration…
Ordering me to quickly pull on some trackers and a coat, he grabbed the keys to the cottage, took me by the hand, and led me to the bay.  The tide was out, exposing the huge rock that is part way along the causeway.  We climbed to the top just in time to watch the sun rise over the bay.
It was an attack on all our senses – the beautiful peachy, orange lights in the sky, the smell of seawater and taste of salt on our lips, the feel of the cool morning breeze on our face, and perhaps most spectacularly, the wonderful crescendo of the dawn chorus.  Starting from hills in the east, as the sun emerged, and growing louder and louder until the shore birds joined in too: the bubble of curlews and the calling of the sandpipers.
Mother Nature laid on the most wonderful show for just us, that morning, sat atop the rock, gazing out to sea, watching the stone of the castle change colour with the sunrise…The most beautiful start to a day that I have ever had.
I have shared some of my other favourite holiday moments over on my blog – a secret well and feeding my baby girl.
I’m looking forward to reading about some special memories Jess has created on her holiday, and wish her a safe trip and a warm, restful, sunny time xx 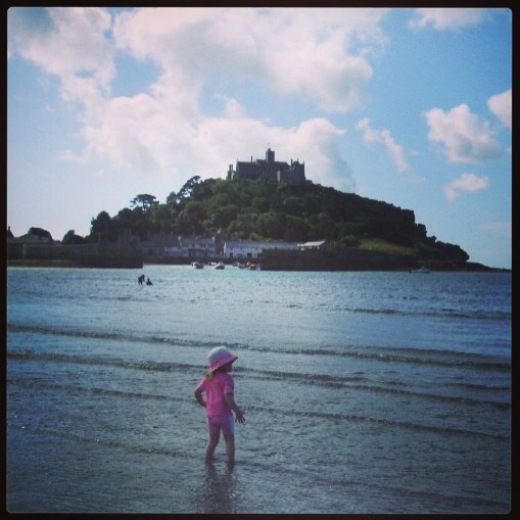