Book Love: The Glassblower of Murano by Marina Fiorato 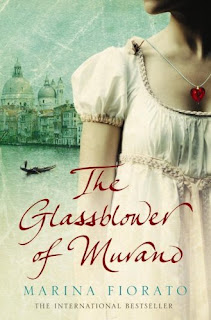 I bought this book on the strength of another book Marina Fiorato had written called The Venetian Contract.  Having loved that book so much I felt sure that this would be along the same lines.

Unfortunately, I was quite disappointed.

In the present, Nora comes to Venice following the failure of her marriage, looking to follow in the footsteps of her Venetian ancestors and enter into the profession of glassblowing.  Despite the fact that women haven’t ever been allowed to work as glassblowers on the island of Murano, she is given a chance by a factory owner on the strength of her surname: Manin.  What Nora doesn’t realise is that although her ancestor Corradino Manin was a great glassblower, responsible for many of the significant glass artefacts in Venice, there is also a dark secret attached to his past.

We also then follow the story of Corradino Manin set in 1681 and his alleged deceit when he sells the secrets of Venetian glassblowing to the French King Louis XIV.

The problem I had with the book was that the plot was just full of holes.  It wasn’t a very believable story in the first place; why would Nora be allowed to work in the Murano factory without even being asked to prove herself simply because she had the surname ‘Manin’.  Then there is the love story between Nora and a Venetian policeman, Alessandro.  He turns up, then disappears randomly, and in the meantime Nora somehow falls head over heels in love with him.  Then it transpires that he is living with a female journalist who somehow happens to be the very journalist who turns up to interview Nora after a campaign is started by the factory owner to try and bring business back to the glassworks using Nora’s ancestry. This is never explained.  Alessandro mentions meeting the journalist in order to ask her to pull a story but the fact we are told that he has been living with her but that is never addressed is just plain odd.  Why tell us?  Why make it a point of contention between Nora and Alessandro?  I won’t even begin to go into the randomness of Nora falling pregnant…

The story of Corradino Manin is quite an interesting one and did appeal to my love of all things historical but that was really just a sideline to the present story, intended to give context to Nora’s talent of glassblowing and the reason why some of the existing glassworkers are hostile towards her.

It was just a really piecemeal storyline and, if I’m honest, I wasn’t that impressed with the level of writing.  The Venetian Contract was flowing, and beautifully descriptive, and the story was interesting with believable characters.  This really really paled by comparison.  Had this been the first book of Marina Fiorato’s that I had picked up, I certainly wouldn’t have attempted another one.

Disappointing and not worth reading in my opinion.  And it’s not often I say that about books!