When we were offered the opportunity to review a Toddlebike I jumped at the chance.  We have a balance bike for Meg and Eli was always trying to climb on it without success so I felt that the Toddlebike would be perfect for him to start learning on.

The Toddlebike is a pre-balance bike for children aged 1-3 years.  It is incredibly lightweight and suitable to be used indoors and outdoors.  It’s made of sturdy, brightly coloured plastic so is attractive to young children and also is really easy to maintain!  There’s no risk of rust and if it gets a bit muddy you can simply wipe it down. 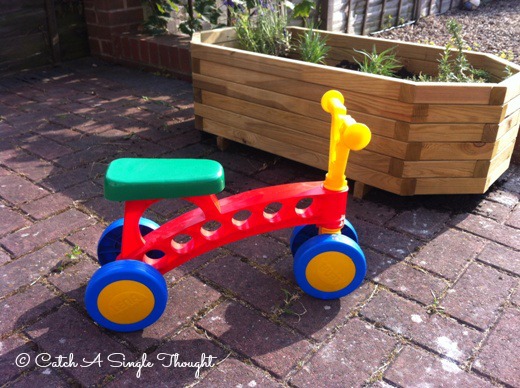 The idea behind it is to bridge the gap between when littlies start walking and when they are big enough for a bike.  It introduces the concept of balance biking at an early age basically!

At first glance, Eli wasn’t so sure about it…he eyed it suspiciously and would cry whenever we tried to encourage him to use it.  Not the best sign!!  Meg on the other hand was enamoured and would zoom up and down the living room at an incredible speed.  After a month of having the Toddlebike and watching Eli warily attempt to get onto it every now and then I was beginning to lose hope.

Then, he decided it was perfect to stand on the seat and I really began to lose hope!

Last month though, on a random day when nothing in particular was occurring, he suddenly came shooting past me. I had to second glance as I thought it was Meg but I was pleasantly surprised when he stopped at the radiator, turned and looked at me and said “Eli’s bike”

Since that point he has been unstoppable, it’s really clicked with him what he needs to do and he’s gaining more and more confidence when riding it.  Since the weather turned nice we’ve moved it outside and he’s been racing up and down the patio alongside Meg on her balance bike which is just lovely.

It’s for that reason that I have struggled to get a decent photo of him using the Toddlebike; he’s just so darn nifty they all come out blurry! 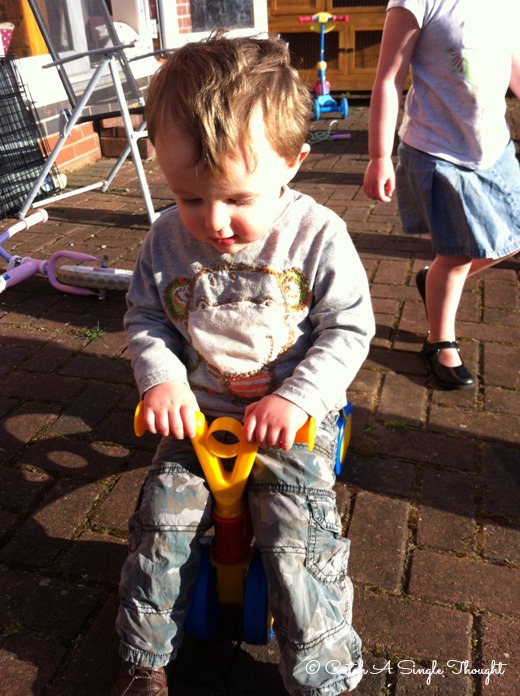 I can really see that he has started to grasp the skills he will need to ride a balance bike.  I am interested to see what will happen when he progresses up.  When Meg first got her balance bike she was incredibly slow (she still is to be fair bless her!) and it took her a good few months to even dare to build up speed.  The rate Eli races his Toddlebike it makes me wonder if he’ll be confident from the word go when he finally gets a big boy bike.

At £23.95 with free p&p I think this is a superb bargain.  It is on a level with other ride-on toys, in fact I think it is better value for money as I can see that Eli will be using it for at least the next 6 months before moving up to a bigger model.  Had we got it earlier, we would have got a lot of use from it.

Definitely gets the thumbs up from us!

I have also got the lovely opportunity to offer you the chance to win a Toddlebike in the colour of your choice.  You can have at the three types available here.

To be in with a chance of winning, simply fill in the rafflecopter below:

a Rafflecopter giveaway
Disclaimer: We were sent a Toddlebike for the purpose of this review.  All thoughts and opinions are my own.  No compensation has been provided for the running of the competition.