Stitches OUT
Yippety do dah day…we can finally start to put Meg’s accident behind us.  Although she did scream and fight, and possibly terrorised the two nurses who were trying to remove the stitches, it appears to have healed well, they were able to remove the stitches, and we just have to keep it covered for the next 4-5 days to allow the whole thing to scab over.  Most importantly though, they were very happy with it and discharged us, so when we said to Meg that we never had to go back, we were actually telling the truth this time!

If you’re squeamish, you will probably want to not look too hard at the picture below but this is the cut before the stitches were removed.  I was surprised at how well it had come together, trust me, if you’d seen it beforehand it was really difficult to imagine how the surgeons would ever manage it! 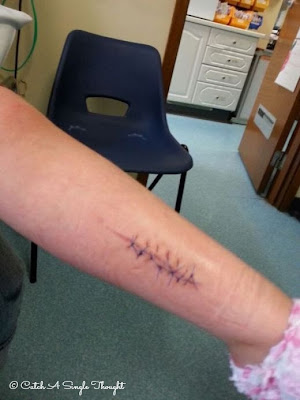 More job news
More job news for us.  I have handed my notice in and from some time in September (all being well) I will become a SAHM!  Well, my hope is that I will be able to pick up some freelance writing work and possibly get a small business up and running, although I imagine that will be quite far down the line.  As with my Other Half changing his job, it will mean a massive change to us financially, but we both believe it’s a season of new things, and the right thing for us to be doing and so we have to trust that all will be well.

It’s very exciting to think that in a couple of month’s, everything will be different for us!

Pre-school Graduation
Yesterday, after we came back from the hospital, we went to Meg’s pre-school graduation party.  It was quite emotional as she has been attending the nursery since she was 9 months old and has come up through the groups with a lot of the same children.  It feels quite sad to think that most of them she won’t see again, as they start school and make new friends.

They took so lovely pictures of them in caps and gowns which I can’t wait to see.  The photographer who took the photos was amazing, he managed to get Meg to smile in a way that I have never been able to! 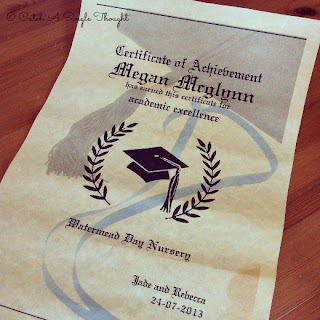 I hope that you have all had great week’s.  I am linking this post up with Michelle’s Reasons to be Cheerful.