I was delighted, as I’m sure most other mummies in the world were, when I heard that Prince William would be staying on the ward with Kate after the birth of their baby boy.  ‘How wonderful for them’ I thought, swiftly followed by the slightly more cynical, ‘oh the joys of private healthcare.’

As is the norm for the majority of women, my Other Half was not allowed to remain on the ward after I had given birth to Meg and had to stay in hospital.  He was booted out  kindly asked to vacate the area when visiting hours ended at 8pm.  )Or, in actuality, at 9pm as he managed to avoid detection for an extra hour.)

The reason dads are not allowed to remain on the ward is to protect women’s privacy…or something.  The reality, for me, and I’m fairly sure I’m not alone in this scenario, is that when I had my first child, at the ripe old age of 21, I had an epidural at 8am and when my Other Half left for home at 9pm I still hadn’t got out of bed.  I had severe second degree tearing, which if you’re really interested to know, you can read about in Meg’s birth story, a catheter and a baby lying half a metre away from me, completely out of my reach.

I’m not going to lie.  The minute he left, I started to sob.  I pressed the button for a midwife to come and pass me Meg so I could feed her and the first thing she said when she pulled my curtains aside was, ‘why are you crying?’  That pretty much summed up my experience.  Meg woke and cried every half hour, whether I was holding her or not.  The times I wasn’t, I had to press the button for someone to come and pass her to me, and when I wanted to put her down, I had to call for someone.  I could hear the midwives commenting every time I pushed my buzzer as I was only a short distance away from their station, but what choice did I have?  I couldn’t actually move and I had a tiny person, my firstborn, to try and think about.  I felt completely humiliated and totally isolated.

To make matters worse, two women were brought up overnight and their partners were permitted to stay with them.  So, where was the thought to the privacy of other women on the ward then?  I don’t think it’s fair in the slightest especially as most of the time, the mums had their curtains drawn so that they could be afforded the privacy they needed.

Or, how about the fact that I wasn’t able to comfort my baby, and I know she kept some of the other ladies awake with her screaming.  Had my Other Half been there, he could have paced with her and made more of an effort to settle her than my sad little attempts.

I didn’t ask to stay in hospital overnight, believe me, had medical circumstances permitted it, I would have gone home as soon as I could.  After Eli was born I was practically pushing past the midwives to get home, there was no way on earth I was going through the same thing again.

The next morning, I was offered the chance to go in the bath and Meg was taken to the nursery.  I had literally been sat in the bath for 3 minutes when I heard her start to cry and there was an apologetic knock at the door as the midwife asked me to get out of the bath and come to feed her.  That was the end of my allotted time to get clean.  How delightful when it was my first contact with water in almost 24 hours.  Would that have been an issue if my Other Half had been allowed to stay on the ward?

I can’t help but think that my experience would have been entirely different had I been able to have the support of my Other Half.

My Other Half has always been a hands on dad, and will never fall into the category of ‘invisible parent’ but by not allowing partners to remain after the birth of their children, this is exactly what they become.  We all know that those first few days after a newborn has made their arrival are a bit of a guessing game; their day is night, their night is day; they wake, they sleep, they wake, they sleep; sometimes they cry just because they do. 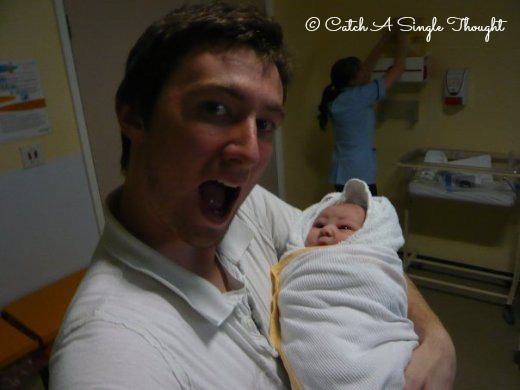 Newborns don’t conform to visiting hours so why should parenting have to?

There are so many other reasons I could add in here as well, emotional well being of the mother due to the hormones zinging round her body, less work for the hospital staff as they haven’t got to respond to every need…the list could be endless.
If I was going to campaign to see a change on maternity wards, this would be it.  Dads should be allowed to stay.
Do you agree?