What’s The Story: Snowed In

I loved joining in with What’s The Story last week and sharing my favourite photo from our honeymoon.  I literally spent all week thinking back over the many many photos we’ve taken, trying to decide which one to share.

In light of the glorious summery weather we’ve been having I was, naturally, inspired and picked a wintery one.

December 2010: my Other Half surprised me by organising an overnight stay in a hotel.  I was pregnant with Eli at the time and had been feeling incredibly run down.  Meg went to stay with my parents and we headed off into the night.  I was completely in the dark about where we were going which would usually terrify me but as we set off, snowflakes started to fall and I was feeling pretty happy about the experience.

By the time we reached Derbyshire it was pitch black and the snow was really going for it.  Visibility was minimal and I spent the entire car journey gripping my seat in terror.  Probably not the atmosphere my Other Half was going for!!

We arrived at the hotel to find it completely deserted.  The owners said that we were one half of only two couples who had kept their reservations due to the extreme weather warnings.  I can’t say it wasn’t relaxing sitting next to a gorgeous log fire, in a completely silent hotel.  It was bliss!

It snowed all night as we slumbered on in our four poster bed (I think we were upgraded to the best room in the hotel, as they had no excuse not to!) and we woke to this…a blanket of snow everywhere.

I’m not a big extreme weather fan but I had to admit that this was pretty awesome.  Does the photo even convey how deep the snow was?  As we were eating breakfast, a family arrived looking for somewhere to stay as they had abandoned their car further up the road.  So it was quite deep! 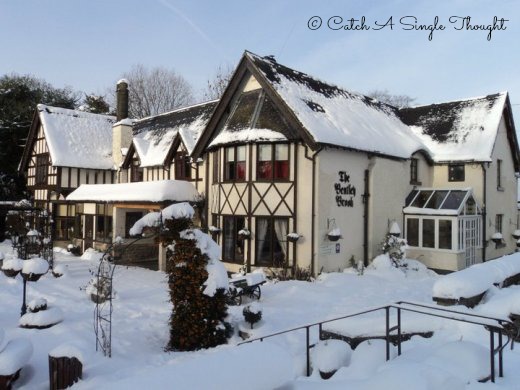 My favourite thing about this, other than the whole romantic aspect (which it really was!), was how deceptive the weather was the next day.  From our window the first thing we saw was clear blue skies, which gave no indication of the severity of the snow outside.  Even when we ventured out it was surprisingly warm.  I guess that’s what happens when you add a couple of inches of snow to the ground!
To see more awesome photo memories, head over to PODcast for the What’s The Story linky.