What’s The Story: Stargazing in the Sinai Desert

In September 2008 we went on holiday to Na’ama Bay, Sharm El Sheikh with some friends.  I was about 9 weeks pregnant with Meg at the time and had a mixed experience.  I was quite lucky that I was only really hit by nausea in the middle of the day when it became unbearably hot.  One of our party caught the ‘pharoah’s curse’ and was ill for quite a few days!
One of the things that we arranged to do whilst there was a Bedouin Stargazing night.  We were picked up from our hotel by a minibus and driven out into the desert.  I had to decline the offer of a camel ride to the Bedouin camp (I was overly cautious with being pregnant!) and instead walked.  I’m glad we did, as we were able to stop and take some stunning photos of the desert hills. 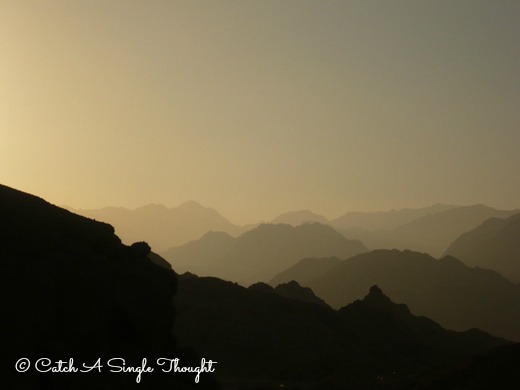 When we reached the camp we were able to see how the Bedouin’s make bread over a camp fire, experience their local delicacies and smoke a shisha pipe.  I must admit I did partake, as I was advised it was totally harmless strawberry flavoured steam!

When the sun had set and we were suddenly plunged into total darkness, we walked a short way out into the desert and did some stargazing.  We were invited to lie down on some blankets and simply enjoy the night sky.  It was amazing to see so many stars, it’s really not something you can appreciate when you are surrounded by artificial lights and we were also given the opportunity to look through a telescope.  I believe we were shown the planet Venus, although I can’t remember!
It was definitely one of the highlights.  Whilst we didn’t get to see ‘traditional’ Egypt which is on my dream holiday lists, it was still a fascinating and eye opening holiday.
I am linking this post up with What’s the Story.  Head over to Charly’s blog for more entries.

A Tale of Three Counties...