As I mentioned in A Tale of Three Counties, the weekend before last we visited Pleasurewood Hills Amusement Park.  Meg loves thrill rides and was beyond excitement when we got into the car.  Her intensity did wane a bit when the maps app we were using on my phone got us a bit lost, according to the map we were right by the theme park, with no theme park in sight!  Luckily, my Other Half also has a sat nav app and that guided us right to the front door.  Crisis avoided!

The park opened at 10am and we arrived at about 9.50am.  I was surprised by how many cars there were already in the car park, we hadn’t expected it to be so busy on a Monday and began to worry a bit about queue length.  Parking up was simple, there were attendants signalling the way making it very straightforward.

We made our way to the pre-booked tickets booth to collect our wristbands and then walked straight through the barriers.  Despite the number of cars, there didn’t seem to be many people and we didn’t have to queue to get in, which had been our fear so that was good.

We headed for the Kiddie Zone first, with a quick stop at the Pirate Ship as that was located as you come through the gates and Meg was chomping at the bit to go on the bigger rides.  The Kiddie Zone was really quiet and there was only one lady attending the rides so we had to follow her from one to the next with only one operating at a time.  This wasn’t a problem though and when we came back to the Kiddie Zone after lunchtime it was a lot busier.  I’m glad we went there first thing. 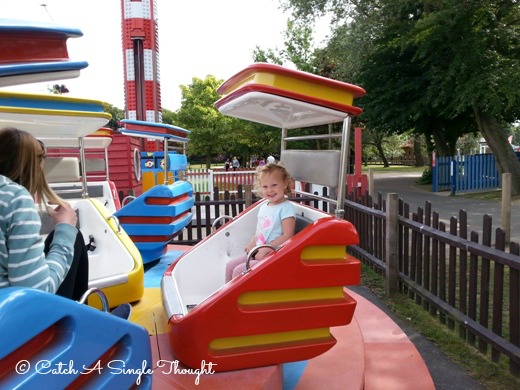 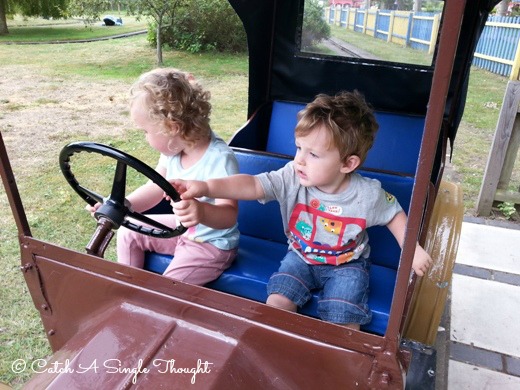 Meg really enjoyed the Pleasurewood Ponies ride and we had to come back and go on that again later in the day. 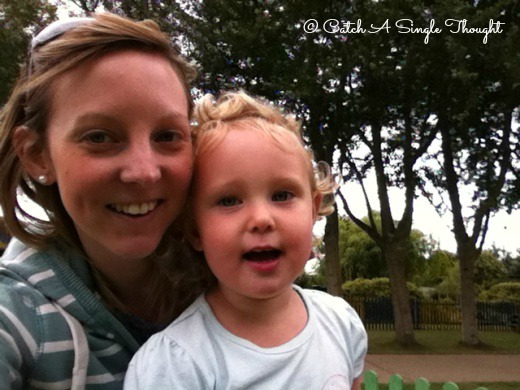 Once we’d exhausted the Kiddie Zone, we walked around the park a bit to try and get our bearings and then we made our way to the picnic and play area.  This was slightly disappointing – whilst the play areas themselves were really good, there were three altogether, two next to each other and one across the path.  None of the play areas were gated and there were hedges at various places between the play areas and the picnic benches.  This meant that you had to be down at the play area to watch your children and you couldn’t sit at a picnic bench and see the play areas.  Not a problem for older children who can probably be relied upon not to run away but with a 2 year old who will escape at the first sniff of free reign, it was quite difficult to watch both Eli and Meg.  It also meant that when my Other Half went to buy food, I had to leave our pushchair at the picnic bench so we didn’t lose it and stand in the middle of the path so I could try to watch both play areas and make sure Meg and Eli didn’t run off anywhere.

We ate our lunch a bit earlier as there was a Sea Lion show on at 12pm which we knew the kids would love.  We were right, it was really great and they both managed to sit still through the whole thing which really rarely happens.  I did feel a bit sorry for the gentleman sat next to us who had to put up with Eli’s excited squeals and foot stamps every time the Sea Lion did a trick!  The show was really fluid and moved quickly from one thing to the next which is ideal when you have young children as their attention spans aren’t that long and they easily become distracted.  It wasn’t boring though and I appreciated it as much as Meg and Eli did. 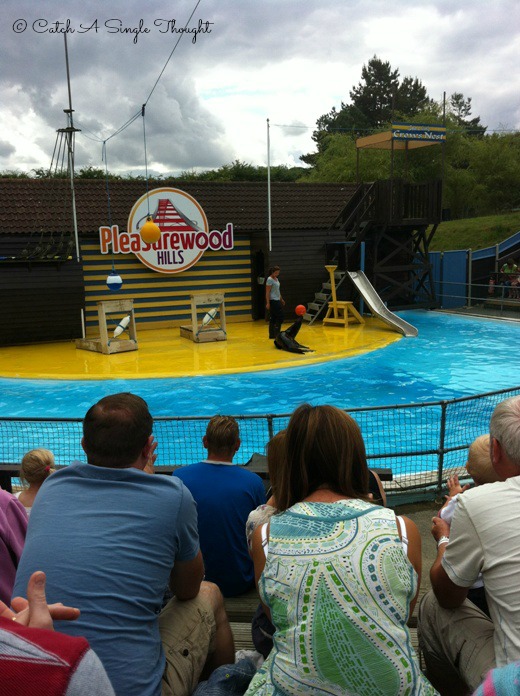 After that Meg went on Enigma, which was the only ‘big’ rollercoaster she was able to go on, much to her disappointment!  She had been determined to go on Wipeout the 50mph one(!) but was 20cm too short.  That wasn’t necessarily a bad thing though as I don’t think my nerves could have handled it!  Despite the queue not looking particularly long, it took my Other Half and Meg an hour and a half to get on the ride which was disappointing as there are only 8 seats on the ride.  I stood with Eli whilst he napped and waited for them and heard many people make the assumption that it wouldn’t take them long to get on the ride due to the length of the queue, only to leave after 10-15 minutes when they realised they’d be there a while!  I think queue estimate times wouldn’t go amiss on a ride like that. 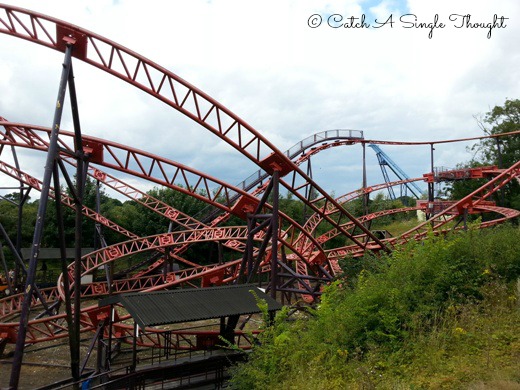 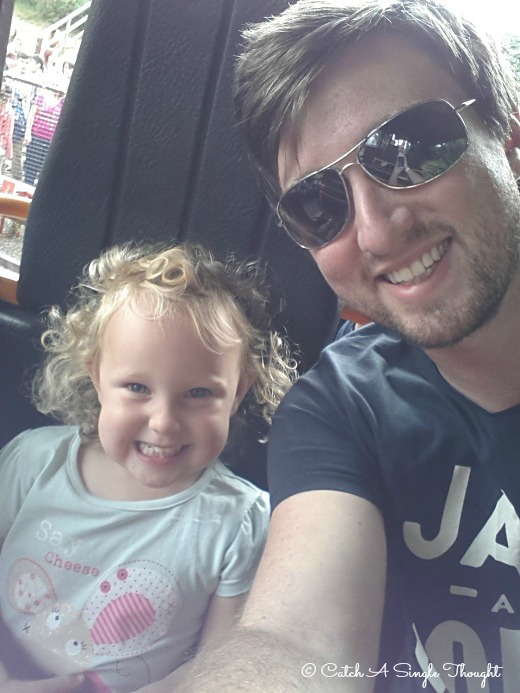 All in all we had a really nice day, Meg was able to go on most of the things she wanted to go on (there were some other rides she didn’t spot!) apart from Wipeout, and she absolutely had a ball.

If you are the parent of a young child, I would take into consideration that there aren’t many rides they can go on.  The minimum height for most of the family rides was 0.9m which Eli isn’t, and that was a shame as he was old enough to know that he wanted to go on, but couldn’t.  Although children under 1m get in for free, it isn’t much of a fun day out for them if they are almost at the height limit but not quite.  I know it would be similar in most other amusement parks so it wasn’t too much of a surprise.  Just a shame.

The day was not entirely lost for Eli though as we did manage to find a train to ride on!  I think we were all in agreement (except maybe Meg!) that it was the best thing we did.  The track runs all round the park and goes through some ‘scary’ woods where you have to spot the fairy houses, toadstools, crocodiles and lions…a bit of an odd assortment with no real explanation but Eli thought it was amazing!  There is a larger train which we also would have liked to go on but after standing at one of the stations for 15mins with no train in sight, and no visible timetable we gave that up.

Pleasurewood Hills also have a new attraction, HoBs Pit, which is said to be one of the scariest rides in the UK.  We gave this a miss as it wouldn’t have been suitable, but it’s worth checking out if you are into that kind of thing!

On the journey home we had two very worn out children which to me always signals a good day has been had and which made the 3 hour drive a lot quieter!!

Seal of Approval?
Under 3’s: Although they would probably get free entry (unless tall!) there isn’t much for the littlies to do here.  Very small children would probably appreciate the Kiddie Zone and there are enough things to occupy them.  Unfortunately for Eli he was old enough to know that he wanted to do something but then wasn’t tall enough to do it, which was a shame for him.  Just something to bear in mind when making your decision.

4+: Great especially if they are over 1m.  Loads to do.  The older your children, the better.

Overall: Wouldn’t recommend this as a day out if you are looking for somewhere to take young children as the facilities and rides are limited but for older children or for a family trip it would be a fantastic day out.

Disclaimer: We were provided with wristbands for Pleasurewood Hills Amusement Park for the purpose of this review.  All thoughts and opinions are our own.

A Tale of Three Counties...