On Wednesday I decided to brave the school holiday crowds and take Meg and Eli to the National Space Centre.  I went online to check the prices the night before and was really pleased to see that under 5’s were free (not many places offer that any more) and that if I booked my ticket online and gift aided, we would automatically get annual passes.  I thought this was brilliant as it cost me £13 for my ticket so that works out at just over £4 each for the three of us for the year.  Not bad!

As Meg and Eli were so excited about becoming astronauts for the day, I thought it would be better to go first thing.  I’m really glad I did.  We arrived around 10am and were one of only a handful of people there which meant we had the run of the place and I didn’t have to worry too much about losing sight of one of the kids.  By about 12pm there were several large groups of children and we weren’t able to look at some of the more interactive things as there were just too many people around.  Top Tip: Head there early! 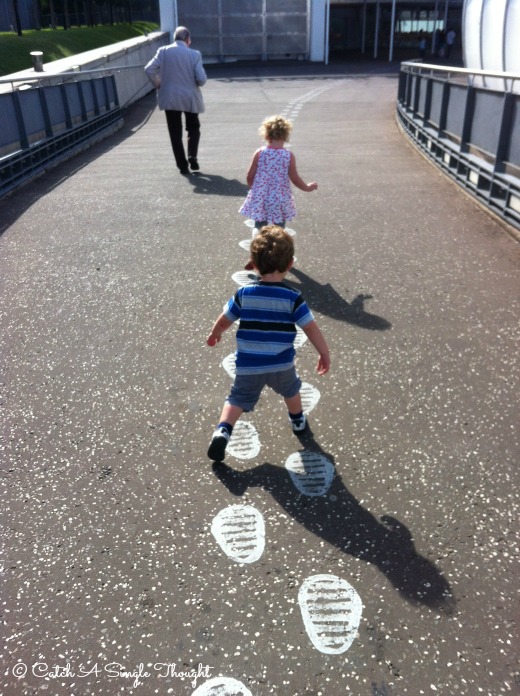 We walked around all the exhibits and again, I was really pleased to see that there were things specifically for the under 5’s.  There were a handful of dressing up stations dotted around where they could be aliens, the sun or an astronaut and consideration had also been taken for taller exhibits with stepping stools being provided so they could get up and have a go.  I thought this was a really great touch.  It’s a nightmare if you have more than one child and you are trying to lift one up to see an exhibit whilst trying to keep eyes on the other! 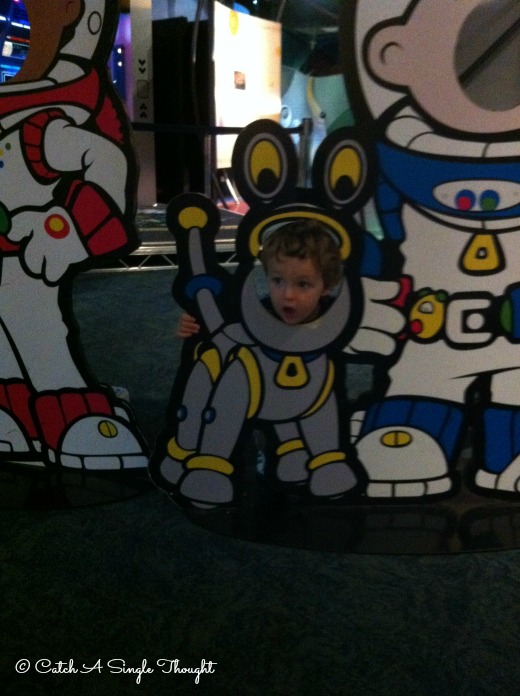 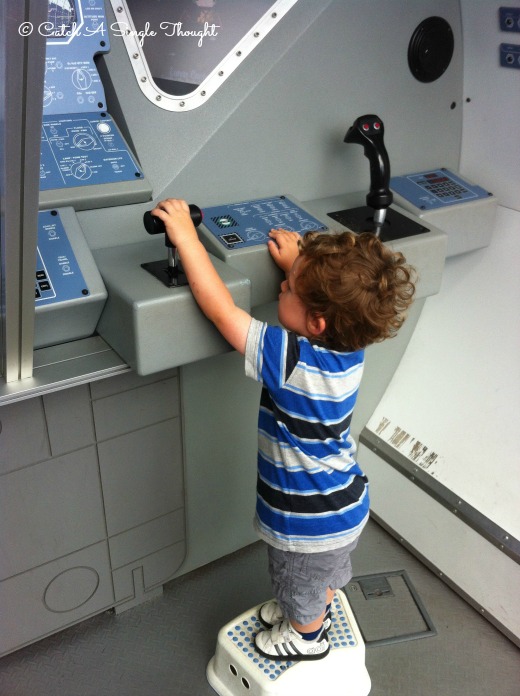 To be honest, I can’t comment much on the quality of the information displayed around as I didn’t get much chance to stop and read but I thought it all looked very good, was clear and easy to see and would be a brilliant place to visit if you have a space lover in the family. 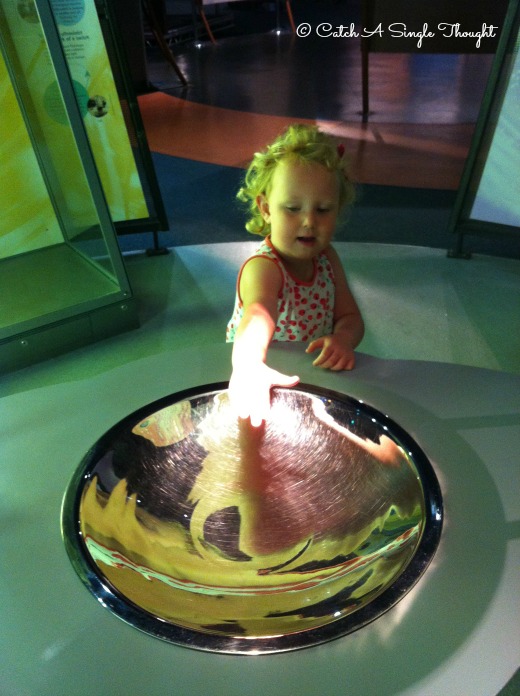 Eli’s favourite part was a little showing booth you could go and sit in to learn about the planets.  You select a planet by pressing one of the buttons around the booth and then look up at the screen above as the details are read out.  I don’t think he was able to understand the finer scientific points but he loved the visual side of it and seemed to charm everyone with his exclamations of ‘wow’ every few minutes. 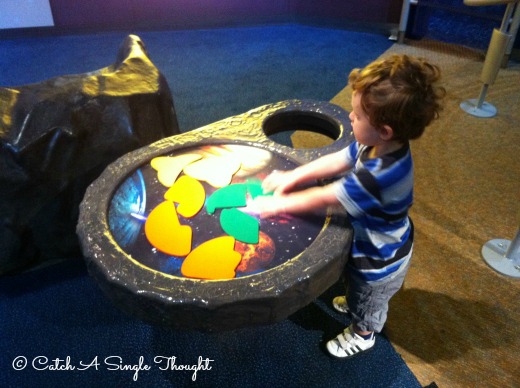 One of my favourite parts of the day was when we climbed the tower.  The different levels of the tower were three different stages of the space race.  On one you could go into a red room with a circular table and hear about the Soviets involvement.  When the voice started the countdown (in a Russian accent) both Meg and Eli started jumping up and down shouting ‘the minions are coming, the minions are coming!’ – they thought Despicable Me was coming on to the screens!

Meg absolutely loved the astronaut section, she LOVED sitting in the ‘rocket’ (I know that probably isn’t the right term for what it was), dressing up as an astronaut and going in the real-size space station.  I think next time we will have to take Daddy along as he knows a lot more about this topic than I do and she was really keen to learn and understand about the various parts of the day.  She really didn’t want to come home! 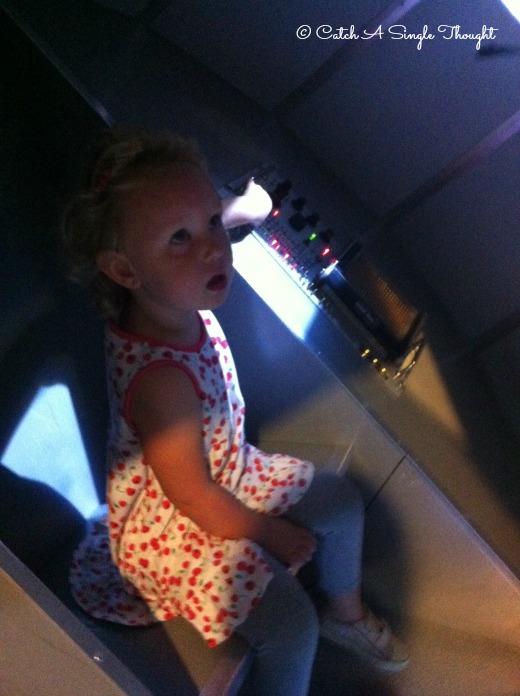 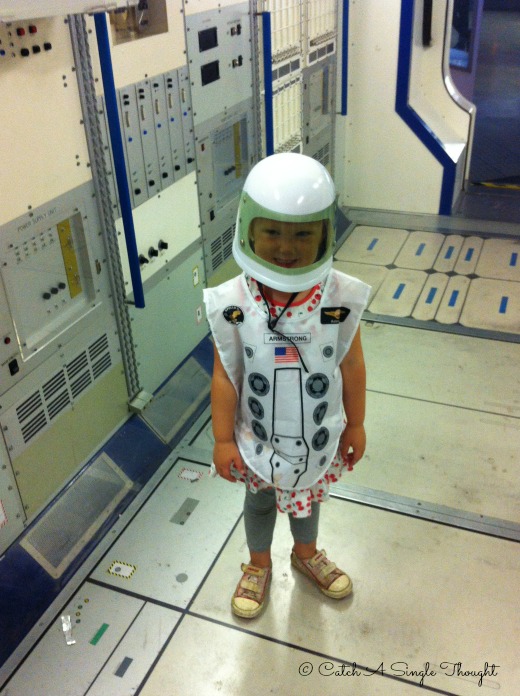 Eli, on the other hand, wouldn’t get into any of the rockets/space things.  I couldn’t work out why he was so terrified of having a go until I realised that he actually thought it meant he’d have to go into space.  I have no idea where or what he thinks ‘space’ is, but he wasn’t willing to risk it.  I possibly have an over-imaginative 2 year old on my hands!

There aren’t really any negatives I can say, I was disappointed we didn’t get to have a go at the Tranquility Base and become trainee astronauts but that is located on the way out and by the time we came to leave it was just far too busy.  I think when we return (and we will) that will be the first place we go to.  We also didn’t visit the Sir Patrick Moore Planetarium show as I didn’t think the kids would sit through it, I think that is one to try out when it’s just me and my Other Half (and I’m sure that will happen too!)

Really the only other thing I could say that I felt a bit let down by was the gift shop.  I had hoped to be able to buy Eli a toy rocket or something similar but they didn’t have anything suitable for his age group.  There was a baby section with rattles and the like and then there seemed to be a big jump with the next level being various stationary items.  I could have bought an American airline plane, but that seemed out of place in the Space Centre.  I’m the only one complaining about that however, I think my Other Half breathed a sigh of relief that I didn’t spend a fortune.

Seal of Approval?
Under 3’s: There is a lot for this age group to see and experience.  I would have liked to see a few more sensory items for them to touch and engage with but overall I think it’s really great.  Better to go when it is quiet though as it’s very easy to lose sight of small children!  If you have a couple of hours to kill then this would make a great option, now we have the annual pass there’s no excuse not to go.

4+: Meg thought this was brilliant and I can only see her enthusiasm growing she gets older and can understand more of what she is seeing.  It would have been great if my Other Half had been able to come along as we could have dedicated some more time to explaining what she was seeing and hearing.  In particular things like finding a telescope’s heat spot completely fascinated her, but I didn’t have the time to go through it all and put it onto her level.  This is not a criticism of the Space Centre, just that there is a lot to explain!

Overall: As you can probably tell, we consider this a really great family day out in Leicestershire.  Perfect if you are local and have a few hours to spare and suitable for all ages groups.  Also worth travelling for if you have a space enthusiast in the family.

Disclaimer: We were not asked to write this review and have not been provided with any compensation.  This is part of a series of blog posts we are compiling on suitable days out for preschool children.