I was incredibly disappointed when we attended our 21 week scan for our first baby, and were told that due to their frog like position, the sonographer was unable to determine the sex of the baby.  I don’t think it had occurred to me up until that point that they might not be able to tell us what we were having.  I had gone into the scan certain that we would leave knowing whether we were team blue or team pink.

My Other Half was convinced we were having a boy and said it didn’t matter but, as any woman who has been pregnant can identify with, hormones and emotions run high and just accepting that I would have to wait wasn’t enough for me!

So, one Saturday morning, when I was 27 weeks pregnant, we caught the train and went for a 4D scan.  I had seen pictures of what 4D scans looked like but I don’t think anything can prepare you for how real your baby looks.  On the black and white grainy pictures you get from the hospital, you are really just seeing the outline of your baby.  On a 4D scan, you can see actual features.

I completely forgot that we were there to find out the gender of Baby Mac and instead just sat staring as they wrinkled their nose and sucked their thumb, blissfully asleep and unaware.  The sonographer wanted us to see them with their eyes open to get the full experience (and our money’s worth), so she sent me for a walk and for a cold sugary drink to give them a buzz.  When we came back, the baby was awake and moving around and it was amazing.  We have a video with footage of them moving around, waving their arms and legs and it’s like nothing I had ever seen before.  All that was going on inside of me?

The best part, and the purpose of the trip, was obviously to find out the gender and we did.  The original plan had then been to keep it a secret and only have the two of us know but my Other Half didn’t quite manage that.  I think his best failing moment was when he said to some friends of ours who were also pregnant, ‘yes, we do know what we’re having.  We aren’t telling anyone though.  Although we can tell you all our boys names now’  Erm…great, thanks!

Remarkably, and for all the cynics out there, Meg did arrive looking very similar to her 4D scan…so it’s not just any baby you are seeing!

I am cheating a little bit this week as well and showing two photos, as I couldn’t pick between them. 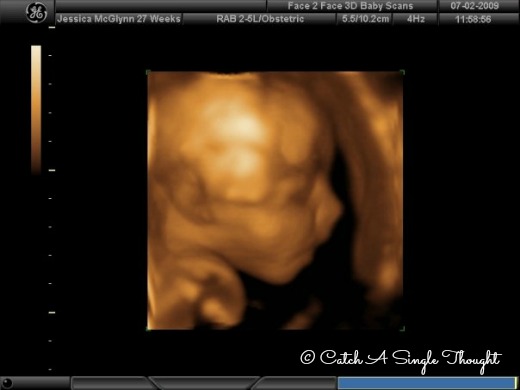 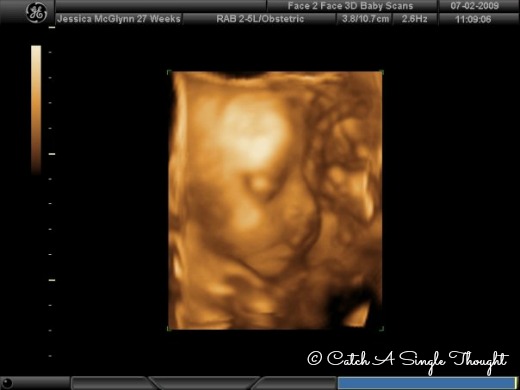