On Wednesday evening we visited a local pub for our dinner.  Not entirely unsurprisingly, Meg and Eli were really fidgety when they were waiting for their meals to arrive and I’m not sure all the couples who were there sans children were quite charmed by Eli’s loud rendition of ’round and round is the name of the game’

Luckily there was a small playground at the back of the pub so I valiantly volunteered to take them both outside to burn off their energy whilst we waited.

There were 2 other children playing in the park when we got there, 2 girls.  Meg and Eli instantly took off, running round and round shrieking.  The 2 girls seemed to be with each other and were playing quite nicely and calmly when another little girl arrived.  She went around the climbing frame two or three times before approaching one of the original girls and saying ‘I’m 6, how old are you?’  The other girl answered and Little Miss 6 said ‘shall we be friends?’ to which she received a nod of assent and Little Miss 6 was included in whatever game the original girls had been playing.

Is it really that easy to make friends I wondered?

I think I had forgotten how seamlessly children can blend and play together.

This time though, the exchange was entirely different.

Meg answered ‘4’ and carried on playing her game.  The little girl crouched down next to her and said, ‘I’m 5, I like your headband.’  Meg looked at her for a minute said ‘I know’ and ran off to carry on her game.

Now, I have heard from various sources that Meg is very sociable and makes friends easily but I was as bemused as Miss 5 year old when Meg just took off.  There was no other engagement from Meg, no polite response or attempt to build a friendship.  It made me think of how differently Meg will behave after a year or so at school.  At the moment, she’s not really interested in making friends, she will play with children if they are willing to join in with the game she is playing, but she doesn’t think beyond that, doesn’t think to creating a group of friends.

I certainly hope she’s different as I can’t see how she will make any friends if she keeps ignoring them! 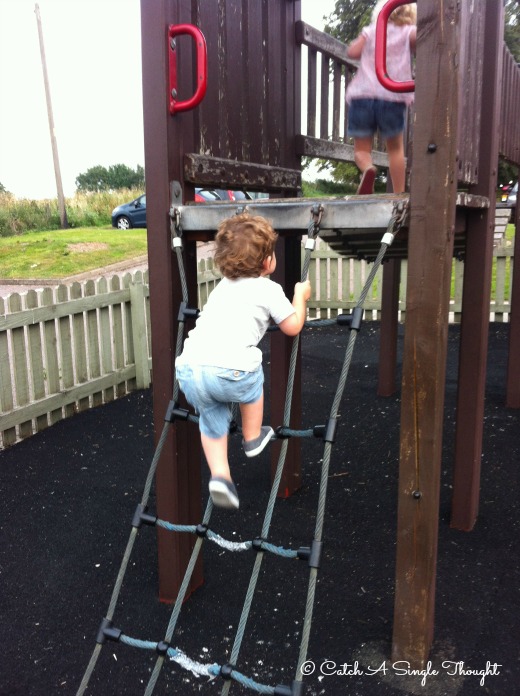 I pulled Meg over to one side and explained to her that Miss 5 year old was trying to make friends with her and perhaps she could ask her what she was called.  Meg considered this for a minute and then marched over to the little girl and said, ‘what’s your name?’  Miss 5 year old replied, ‘Sophie’ and smiled hopefully.  Unfortunately, remit fulfilled Meg simply nodded her head and walked away.  After all, she’d done what I asked hadn’t she?  We were saved by the announcement that our dinner had arrived and I made sure to cover for Meg and tell Sophie that she had a very pretty name.

It was interesting when we went back into the park after our dinner.  There was just one other boy playing who must have been about 7 or 8.  Meg instantly reverted back to the game she had been playing before we left and Eli started running round.  The boy began to chase Eli, pretending to be a monkey and a lion and helping him up the ladders and across the bridge.  There was no verbal exchange, no acknowledgement of how old they were or what they were called, just a simple acceptance that they were going to play together and that was that.

How different boys and girls are!