On Saturday we celebrated our sixth wedding anniversary.  We did the usual thing, exchanged gifts (mine: a tattoo, his: a cast iron griddle pan) and saw in our anniversary with French sparkling wine, a chinese and the X-Factor…oh we know how to live!

It made sense therefore, to share my favourite wedding photo for What’s The Story this week.  I loved our wedding, it was such a clash of all the things that make us Team Rocket!  *Wonders how many people will understand the reference?!?*

It’s hard to describe our wedding in a nutshell, I walked down the aisle to the instrumental version of ‘Can You Feel The Love Tonight’ from the Lion King and then walked back up to ‘The Adventure’ by Angels & Airwaves…two songs that in no way go together but that make sense to us.

I wore a pink wedding dress, which was more tasteful than it sounds(!) and I was 45 minutes late to the ceremony due to getting stuck behind a dustbin lorry in the one way streets of Shrewsbury.  I’m not sure whether it crossed my Other Half’s mind that I might not turn up!  I had extensions put in for the day which were a nightmare to get out afterwards…I would not recommend extensions and hair spray to anyone.  We mixed table diamonds with African poo seeds (a long story…) and rocked out to a live band for our evening reception.

Would I do it any differently?  Well, I’d probably skip the amount of bling we had but at the time, it was perfect. 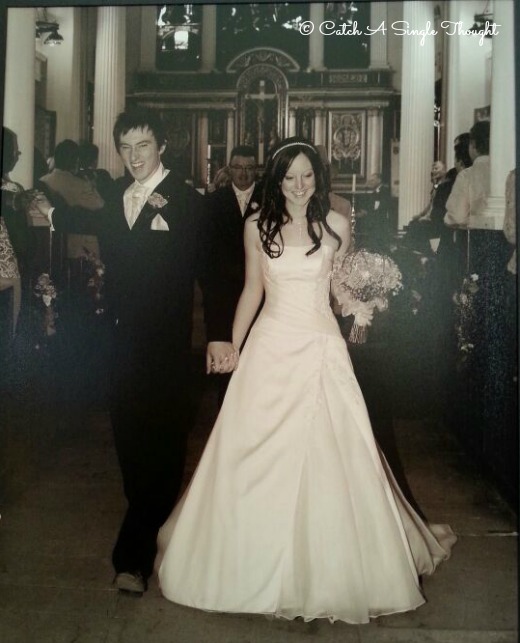