Meg woke up full of excitement for her first day of school, she dressed herself in her uniform and was raring to go. 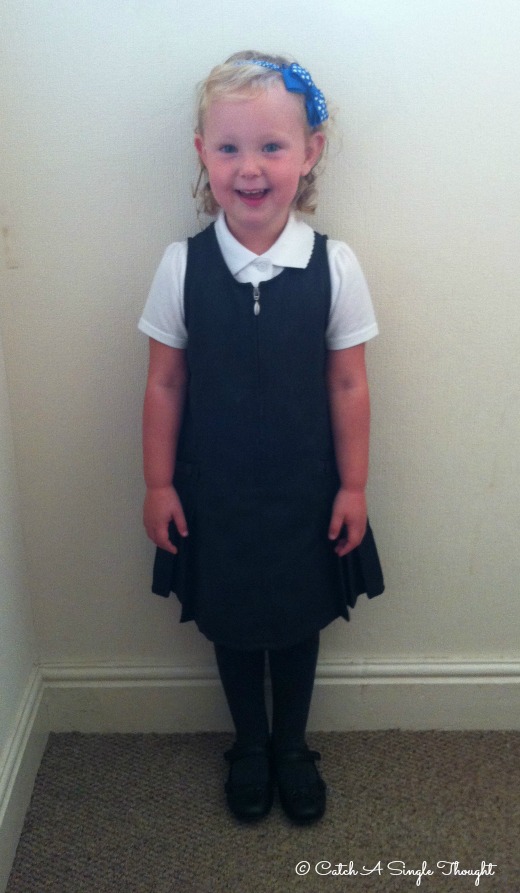 There were no signs of the previous day’s nerves when she said she wanted to be 3 again so she didn’t have to go to school, and instead she chattered away to her Daddy the whole way there checking and double checking that she really was going to school. 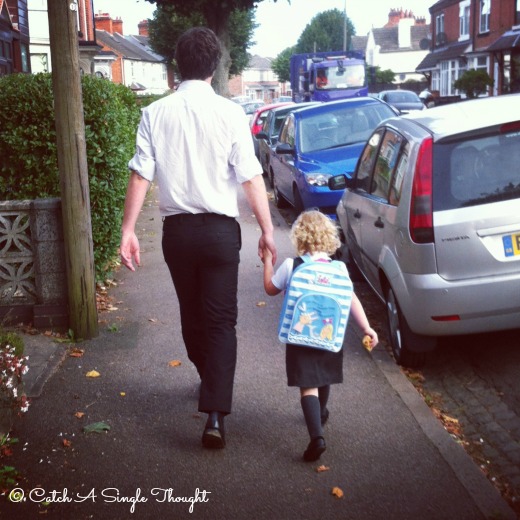 When we entered the playground, I saw the first sign of indecision flash across her face.  It was full of parents and bigger children, when we’ve visited the school previously the playground has been empty.  It didn’t help that we weren’t 100% sure where we were meant to go so I dropped back to assess and I think that made Meg begin to worry.

The plus side of her having these little wobbles is that I forgot to be emotional.  I was actually starting to lose patience, she was the only child having an issue with staying without their parent.  Why did it have to be my child?

Then she spotted some other children finding their names on a board and popping them into a basket.  That caught her attention enough for her to begin to unwind.  Next, she saw that there was free access to a computer and she was off like lightning.  I hovered near to her, unsure whether she was really alright, ‘do you need me to stay?’, she didn’t even glance at me as she said ‘no, I’m fine.’

That was it, I left and when I returned 3 hours later she came bounding out of the classroom bearing another child’s book bag (why my child?!?) and with a big grin on her face.

She can’t tell me what she got up to, of course, just that it was good and she’s alright about going again tomorrow.


So, first day at school = done.  Of course, I’m so glad she had a nice time, and I have a little laminated picture of her with a big smile on her face as hardcore evidence that it really was okay.  Now I’ve just got to get my head around her going for the rest of the week now.  Then the one after that, and the one after that…

When did my baby get old enough to go to school?!?